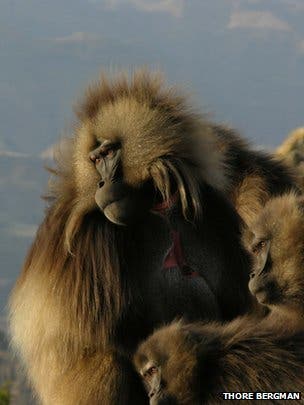 The gelade make strange sounds that biologists keenly describe as being similar to those produced during human speech. (c) Thore Bergman

Scientists have always tried to answer how speech developed in humans or what are its evolutionary mechanisms, a mystery made even more difficult to unravel since none of our close primate relatives has been granted with even the most primitive forms of speech, or so it was thought. Researchers studying the gelada – a primate that closely resembles the baboon – found that its calls show distinct features that mirror those of humans speech.

The call of the gelada, which live only in the remote mountains of Ethiopia, sounds like a cross between a yodel and a baby’s gurgle. Upon closer inspection, there’s a lot more to it than just noise though.

The lead author Dr Thore Bergman, from the University of Michigan in the US, said: “Geladas make vocalisations that have some speech-like properties – it’s the first time that that has been shown in a non-human primates.”

Monkey and apes can only make the most basis noises, however a study published last year suggests that despite non-human primates lack the vocal anatomy required to produce sophisticated sounds, a behaviour known as “lip-smacking” shared by many could be related to speech. The term describes the rapid movement of the jaws, lips and tongues in much the same way that humans do as they speak.

In addition to lip-smacking, however, the gelade have been shown to also produce complex, undulating sounds whose patterns closely resembles those found in human vocalization.

“In [human] speech, the onset of a syllable is loud and then there are quiet parts inbetween. If you were to look at a waveform where you see how speech gets louder and quieter across time, the time between those peaks happens at a fairly predictable frequency of 3Hz to 8Hz across different languages.

“The same thing happens with the gelada ‘wobbles’ – the periodicity has the same frequently,” Dr Thore Bergman explained.

The researchers recollect how amazingly similar to human-speech the gelade hauls are.

“I would find myself frequently looking over my shoulder to see who was talking to me, but it was just the geladas,” he recalled. “It was unnerving to have primate vocalizations sound so much like human voices.”

The researchers do not yet know how the gelade use their hauls to communicate with each other if the case in the first place, yet their findings offer solid hints as to how the evolution of speech might work – a combination of “lip-smacking” and vocalisations.

The study is published in the journal Current Biology.