Nature is really messed up sometimes. 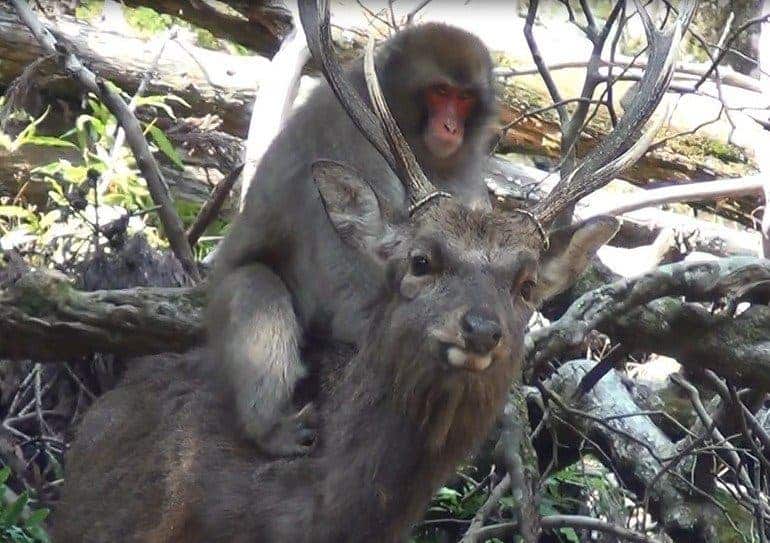 Adolescent female Japanese macaque on the back of a male sika deer. Courtesy of Noëlle Gunst

Researchers from the University of Lethbridge in Canada first spotted the behavior earlier this year, but it was a single anecdotal episode. It wasn’t clear why or even exactly what was happening.

“Even the sexual nature of this interaction was not clearly demonstrated,” said Noëlle Gunst.

So she and her colleagues did what you’d expect from scientists: they went back to look for more evidence. They looked at different types of sexual relationships, particularly between adolescent female monkeys and male deer.

Japanese macaques and sika deer have complex relationships. The macaques sometimes ride deer just like humans ride horses. The deer seem to tolerate it in exchange for grooming and leftover food. But this particular relationship is quite different.

Researchers liken it to homosexual monkey-monkey interactions, where female macaques mount each other. The females also mount the deer, using the same type of movement and the same vocalizations — so the deed appears sexual, at least for the monkeys. The deer, on the other hand, don’t seem as involved.

Some deer shook the macaques off. But others, especially adult male deer, let them do their thing. Some don’t even stop eating while the monkeys are humping them. Still, the acts were persistent and went way beyond mere thrusting or humping. The “monkey-to-deer solicitations … were persistent and conspicuous,” the researchers write. All in all, researchers documented 13 successful pairings and 258 separate mounts. So… what does it all mean?

Interspecies sexual relationships are not unheard of in the animal world, though generally, they’re between closely related species — nothing like this. The purpose of the act can’t possibly be reproductive, so the macaques are doing it for a different reason. Researchers have a few ideas.

The first is that this is a way for adolescent monkeys to start “learning sex” and/or explore their own sexuality. It could also just be a way for them to obtain sexual stimulation with no strings attached — something I’m sure many of us can empathize with. Younger female macaques have also been reported to have intercourse with each other, presumably for the same reasons. Another possibility is that they just don’t have any sexual partners available. Adolescent females are routinely rejected and are not considered desirable among the population.

Lastly, it could also be a non-sexual display. It might be a cultural phenomenon, a social fad. Time will tell, researchers say. They plan on carrying out more observations to detail the nature and purpose of this unusual behavior.