There isn’t a less dreaded sight in any respectable bar than a beer bottle gushing foam. It’s not the bartender’s fault though (not necessarily), since different assortments of beer have their signature foam – some make more, some make less. Breweries nowadays use all sorts of anti-foaming agents, and now food scientists in Belgium – the country with the most breweries per capita –  report a novel approach: using magnets.

Science for the greater beer 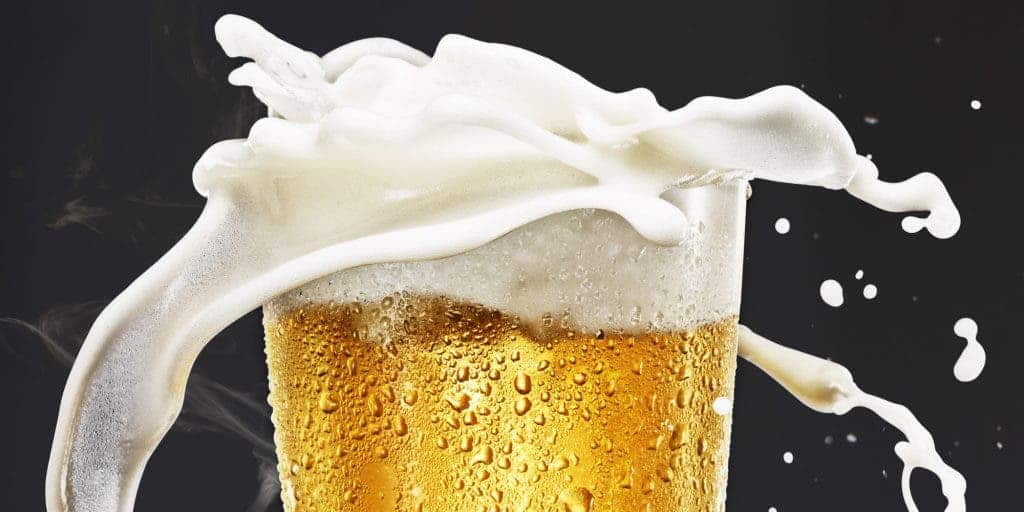 Foam gushing off a pint – you either love it or hate it. Credit:

Foam doesn’t necessarily have to be a bad thing. Actually, the two-finger thick foam in a pint is seen a symbol and hallmark of good beer. Guinness, for instance, adds nitrogen to make the foam tastier. When beer foams, it is obviously due to the creation of bubbles. This phenomenon is referred to as nucleation, which is not that well understood. Basically, what happens is a group  of proteins and smaller polypeptides (additional proteins) act as a group and individually as foam positive agents. One particular protein naturally found in barley is Lipid Transfer Protein 1 (LTP1), and it plays a large role in a beer’s foam.

LPT1 is very hydrophobic – it doesn’t like water – so in order to make means, it latches on to CO2 bubles, which are produced during the fermentation process, as well as during the bottling. The protein piggybacks the CO2 and rises to the surface where it forms a coating on the bubbles maintaining the foam. When fungi infect the barley grains in beer’s malt base, these can cause the beer to overfoam. To counter this, brewers add hops extract, an antifoaming agent that binds to the hydrophobic proteins first.

Writing in the  Journal of Food Engineering, Belgian researchers report an ingenious way to reduce foam. They applied a magnetic field to a malt infused with hops extract to disperse the antifoaming agent into tinier particles. Imagine a big sphere and 1,000 other smaller spheres which when joined together form the big sphere. Which of the two has the greatest surface area? That’s the trick. It’s mostly used in chemical applications, especially when working with expensive catalysts like platinum. You break your agent into smaller parts so the surface area is greater, thus reacting more.

The team reports that the smaller particles were much more effective at binding to more hydrophobins, blocking carbon dioxide and decreasing gushing. When the technique was applied to a real brewery, much lower amounts of hops extract were needed to stop foaming. This translates into savings, making the findings of great interest for the beer industry. Future research is needed to determine whether the magnetic field alone is enough to reduce foaming at an industrial scale.

One thought on “Magnets could help make less foamy beer”