Mammals today give birth to relatively few offspring with larger brains than other vertebrate species. However, this strategy wasn’t always popular. According to a new study performed at the University of Texas, a mammalian precursor no bigger than a small dog would give birth to as many as 38 babies at a time. 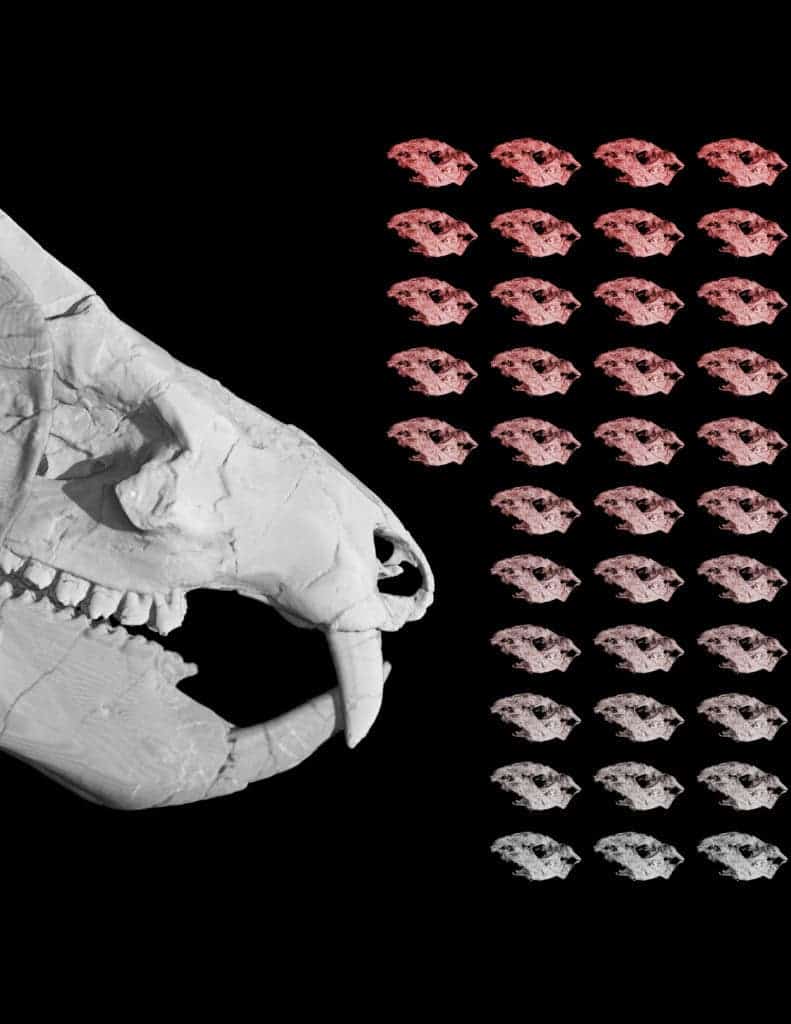 A figure representing the 38 Kayentatherium babies found with an adult specimen. Credit: University of Texas.

The 185-million-year-old creature in question, known as Kayentatherium wellesi, was a cynodont (“dog teeth”) — the closest reptile relatives of mammals

Cynodonts predate dinosaurs, first appearing in the fossil record about 260 million years ago, during the Permian period. Their descendants include marsupial and placental mammals (the ‘default‘ mammals), as well as monotremes — mammals that lay eggs instead of giving birth to live young, such as the platypus and echidna.

Despite their mammal-like skulls and jaws, cynodonts were still reptiles. K. wellesi is a prime example of just how different pre-mammalian animals could be from the lineage they spawned.

This particular fossil specimen — recently described by researchers at the University of Texas — was discovered 18 years ago in the Kayenta Formation of northeastern Arizona. In wasn’t until 2009 that Sebastian Egberts, at the time a fossil preparator at the University of Texas, recognized the excavated chunk of rock for its real worth. Protruding specks of tooth that looked like they belonged to some fish or primitive reptile later turned out to be something far more exciting. 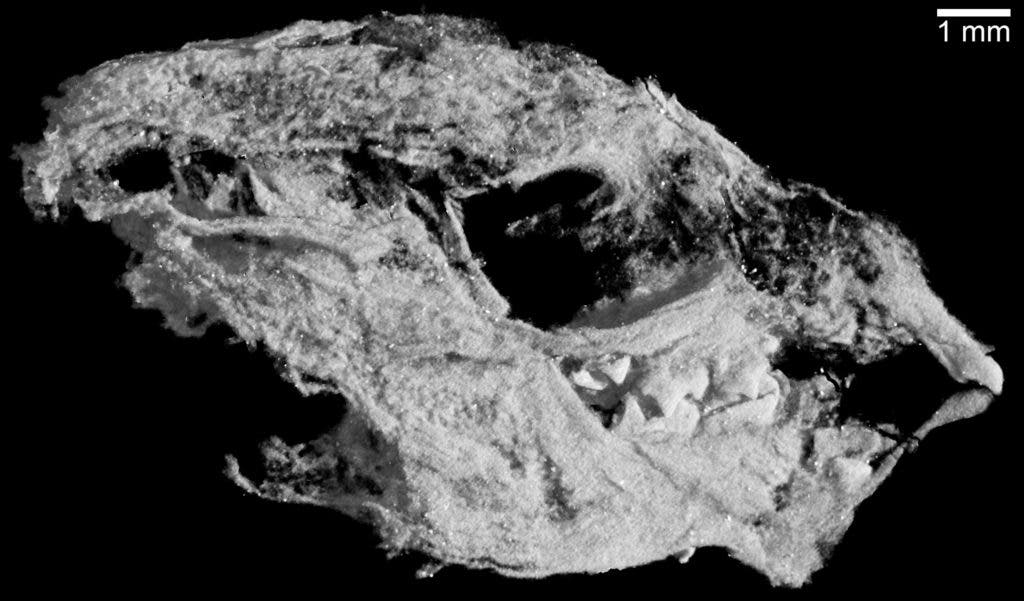 The skull of a baby Kayentatherium, which is only about 1 centimeter long. Credit: Eva Hoffman / The University of Texas at Austin.

Using micro-computed tomography (micro-CT) scans, researchers were able to resolve the fine features of the fossils encased in the slab without actually having to cut it open. Inside it, researchers found the fossils of a mother and the tiny jaws, teeth, skulls, and partial skeletons of its babies — no fewer than 38 individuals. The babies’ skulls were proportional to the mother’s, like miniature versions of adult K. wellesi. This is the first evidence of a mammal precursor’s babies on record.

The skulls of the cynodont’s babies are just 0.4 inches (1 cm) long, a tenth of the size of their mothers. However, modern mammal babies have disproportionately bulbous heads, that encase their big brains. Modern mammals also have much smaller litter sizes.

Credit: Eva Hoffman / The University of Texas at Austin.

It makes sense to birth fewer offspring when switching strategies to big-brained babies — it’s simply far more energy intensive to bear and raise them. These findings suggest that a critical step in the evolution of mammals was trading big litters for big brains. 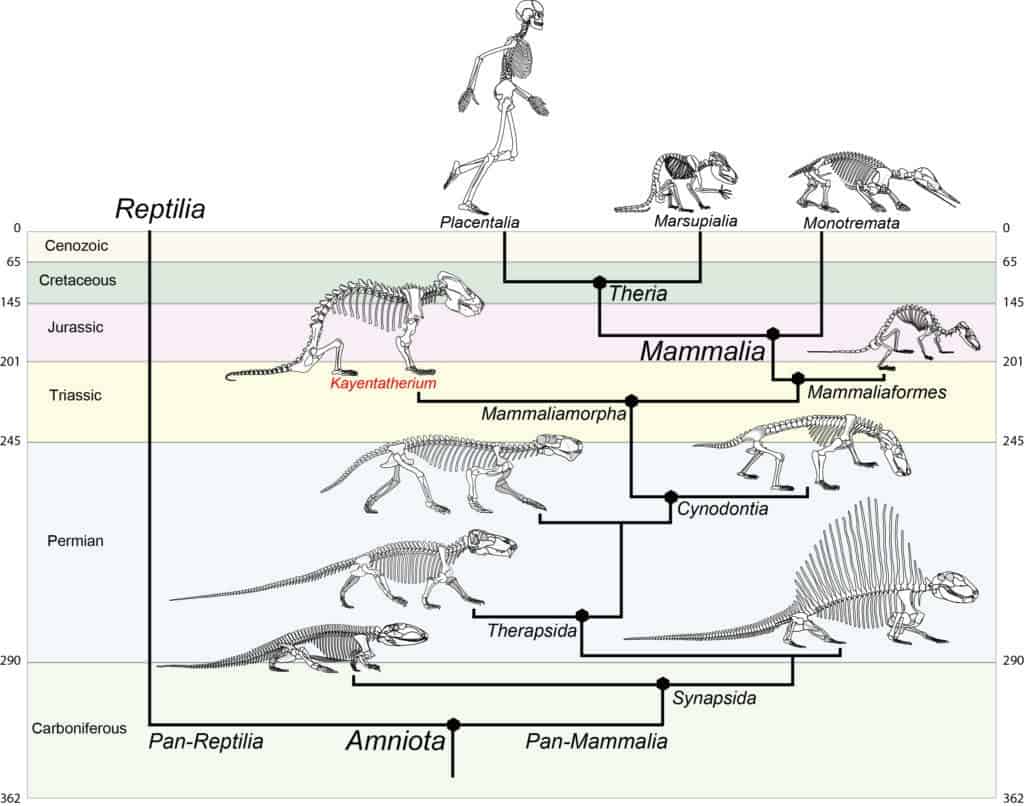 Kayentatherium is an extinct mammal relative that lived during the Early Jurassic. Credit: Eva Hoffman / The University of Texas at Austin.

K. wellesi’s impressive litter of 38 offspring likely developed inside eggs, akin to reptiles, or had just hatched when they perished.

Ultimately, following the development of mammalian reproduction relates to human development. This way, we can learn more about the evolutionary processes that shaped our species.

“These babies are from a really important point in the evolutionary tree,” study lead researcher Eva Hoffman, a graduate student of geosciences at the University of Texas, said in a statement. “They had a lot of features similar to modern mammals, features that are relevant in understanding mammalian evolution.”

The findings appeared in the journal Nature and were presented at the 78th annual Society of Vertebrate Paleontology meeting.