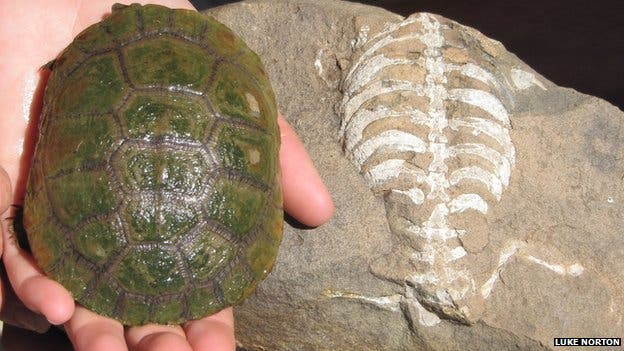 A living South African sideneck turtle next to its 260-million-year-old relative, Eunotosaurus africanus.

Turtles are maybe the most majestic creatures in the reptile world, and have always been a source of inspiration for man. Everybody knows the fable of the turtle and the hare, which teaches how slow, but sturdy and resilient strides can outwit inconsistent sprints. The turtle’s really serious about it, and as evidence it practices what it preaches. You see, recent findings following the study of what may quite possible be the earliest turtle ancestor show that the reptile has been working for million of years to structure and build its signature hard shell we all come to know and love in modern turtles.

From an evolutionary point of view, turtles are unique as no other animal has been found to exhibit any closely analogous structures. But how did the turtle’s shell come to be? Previously, the earliest turtle ancestor was identified as being Odontochelys semitestac, discovered in China, which unlike modern turtles lacked a vital part: the top shell, called the carapace. The fossils were dated as being 220 million years old, however only 10 million years later, fossil remains of the species that followed showed that the carapace had since evolved.

Now, Odontochelys semitestacea has been dethroned as the oldest ancestor of the turtle with a developing shell structure, after researchers  Smithsonian Institution and Yale University have discovered an extinct South African reptile that bridges  the 30 to 55-million-year evolutionary gap. The fossils of Eunotosaurus africanus were discovered at the dawn of the last century, but have only recently been described and exposed to their true value.

Eunotosaurus  is thought to be around 260 million years old and stands as possibly the earliest representation of the turtle’s evolutionary lineage. Before we go on, however, it’s important to note how a turtle shell forms. By studying turtles from embryo to adulthood, researchers found the turtle’s shell structure is a fusion of over 50 bones that include portions from the pelvis, vertebrae, and ribs – first the ribs broaden, followed by a broadening over of the vertebrae, with an outer layer of tough skin on the perimeter of the skin topping everything as the final state of development.  It’s clear the shell is an intricate structure, whose evolution occurred over millions of years and was gradually modified into its present-day shape.

“The reason, I think, that more animals don’t form a shell via the broadening and eventually suturing together of the ribs is that the ribs of mammals and lizards are used to help ventilate the lungs,” said Tyler Lyson, of Yale University and researcher with the Smithsonian.  “If you incorporate your ribs into a protective shell, then you have to find a new way to breathe.”

Like  O. semitestacea a, Eunotosaurus also shows  nine ribs that were broadened and lacks  intercostal muscles, the creature however did not have broad spines on its vertebrae, which both Odontochelys and modern-day turtles do have. Lyson explained that the development of Eunotosaurus’s shell makes it an intermediate specimen, placing it between modern turtle shells and those of primitive creatures. Such a placement in the fossil record can help link turtles with other reptiles and bridge current gaps.

“One of the direct consequences of forming a protective shell by broadening and locking their ribs is that turtles cannot use their ribs to breathe,” Lyson said.

“Instead turtles have developed a unique abdominal muscular sling that wraps around their lungs and organs to help them breathe.”

To breathe, turtles had to find workarounds, as the incorporation of rib bones into their shell structure doesn’t allow for the ribs to expand and contract during the breathing process. Modern turtles use buccal pumping and limited respiration around the cloaca to breathe, however how this mechanism evolved is yet unknown and for Lyson and his team this marks the next step in their evolutionary study of turtles.

Eunotosaurus was described in a paper published in the journal Current Biology.