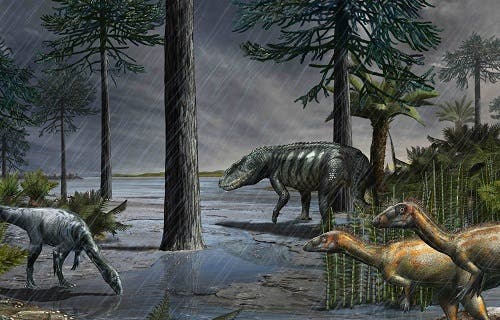 A life-scene from 232 million years ago, during the Carnian Pluvial Episode after which dinosaurs took over. A large rauisuchian lurks in the background, while two dinosaurs species stand in the foreground. Based on data from the Ischigualasto Formation in Argentina. Credit: Davide Bonadonna.

Much has been said about the famous asteroid impact that wiped out the dinosaurs 65 million years ago and ushered in the age of mammals, eventually clearing the path for our species to achieve total domination. However, in turn, the dinosaurs were also privileged by a different mass extinction event, which is far less studied than the asteroid impact. This was the conclusion of a new study which found that dinosaurs became far more prevalent across the world after a mass extinction called the Carnian Pluvial Episode.

Starting and ending with a bang

The Carnian Pluvial Episode occurred roughly 232 million years ago. During this time, a series of cataclysms, triggered by volcanic eruptions in western Canada, shifted the climate from wet to dry and from dry to wet again. The hostile periods of global warming and acid rain had taken their toll on countless species that eventually went extinct.

Researchers at the MUSE-Museum of Science Trento, Italy, the Universities of Ferrara and Padova, and the University of Bristol investigated ancient rock deposits in Northern Italy’s Dolomites mountain range which still had dinosaur tracks trapped inside them. This allowed them to build a timeline for dinosaur expansion; the more and diverse the tracks, the more successful the dinosaur must have become. For instance, in the early Triassic, some 245 million years ago, dinosaurs were very rare and stayed that way for at least 13 million years. After the Carnian extinction, however, dinosaur footprints became ubiquitous.

“We were excited to see that the footprints and skeletons told the same story,” Massimo Bernardi, a researcher at the University of Bristol, said in a news release. “We had been studying the footprints in the Dolomites for some time, and it’s amazing how clear cut the change from ‘no dinosaurs’ to ‘all dinosaurs’ was.”

When the researchers calculated the peak of this expansion, they found that it coincided with the end of the Carnian Pluvial Episode. What’s more, the Dolomite samples also contained evidence of climate change. Namely, the researchers detected four pulses of warming and climate disruptions within a million year span, which must have led to repeated extinctions.

“The discovery of the existence of a link between the first diversification of dinosaurs and a global mass extinction is important,” said Mike Benton, co-author of the new study and a professor at the University of Bristol.

“The extinction didn’t just clear the way for the age of the dinosaurs, but also for the origins of many modern groups, including lizards, crocodiles, turtles, and mammals — key land animals today.”