An MIT Media Lab team build a plant-cyborg. Its name is Elowan, and it can move around. 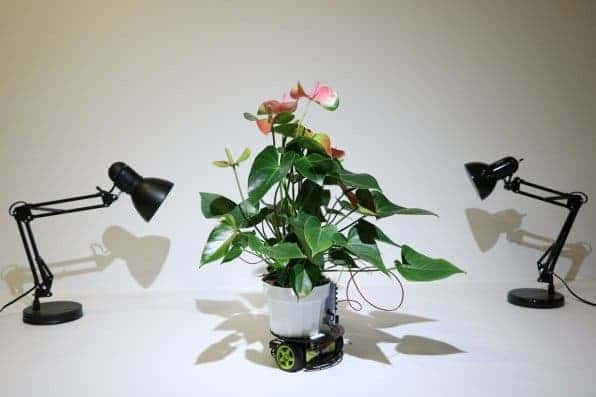 For most people, the word ‘cyborg’ doesn’t bring images of plants to mind — but it does at MIT’s Media Lab. Researchers in Harpreet Sareen’s lab at MIT have combined a plant with electronics to allow it to move. The cyborg — Elowan — relies on the plant’s sensory abilities to detect light and an electric motor to follow it.

Plants are actually really good at detecting light. Sunflowers are a great example: you can actually see them move to follow the sun on its heavenly trek. Prior research has shown that plants accomplish this through the use of several natural sensors and response systems — among others, they keep track of humidity, temperature levels, and the amount of water in the soil.

However, plant’s aren’t very good at moving to a different place even if their ‘sensor and response systems’ tell them conditions aren’t very great. The MIT team wanted to fix that. They planned to give one plant more autonomy by fitting its pot with wheels, an electric motor, and assorted electrical sensors.

The way the cyborg works is relatively simple. The sensors pick up on the electrical signals generated by the plant and generate commands for the motor and wheels based on them. The result is, in effect, a plant that can move closer to light sources. The researchers proved this by placing the cyborg between two table lamps and then turning them on or off. The plant moved itself, with no prodding, toward the light that was turned on.

While undeniably funny, the research is practical, too. Elowan could be modified in such a way as to allow it to move solar panels on a house’s roof to maximize their light exposure. Alternatively, additional sensors and controlling units would allow a similar cyborg to maintain optimal temperature and humidity levels in, say, an office. With this in mind, the team plans to continue their research, including more species of plants to draw on their unique evolutionary adaptations.