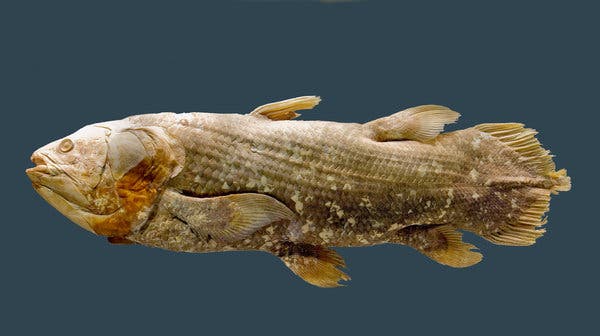 The coelacanth is classed as a sarcopterygian, a term meaning fleshy fins. (c) Chip Clark/Smithsonian National Museum of Natural History, via Associated Press

A matter of great debate and ardent discussion in the field of evolutionary biology today is the transition of complex life from a watery environment to land. So far, there have been numerous speculations put forward in attempt to explain how tetrapods (four-legged land animals) first evolved and washed ashore to start life fresh as land-based animals, however the missing links that mark this transition have eluded scientists.

After sequencing the DNA of a primitive fish that hasn’t evolved much in the past 400 million years and that was thought to have disappeared around the time of the dinosaur extinction, scientists lead by  Chris Amemiya, a biologist at the University of Washington in Seattle, found a gene which when inserted into mice caused them to sprout limbs. The findings might help reveal how fish ultimately swapped their fins for legs and transitioned to walking on land.

The fish in question is called the coelacanth, and was thought to be extinct. However, in 1931 fishermen caught a living specimen, identified later as an African coelacanth, in South African shores. Later, hundreds of specimens were found around the Comoros Islands in the Indian Ocean, as well as off parts of Indonesia. What makes it extremely appealing to researchers is the fact that it has changed very little in the past 400 million years, which is why it’s considered by many as a “living fossil.”

“It really is a cornerstone from which we can view tetrapod evolution,” said study co-author Chris Amemiya, a geneticist at the Benaroya Research Institute in Seattle, Washington. 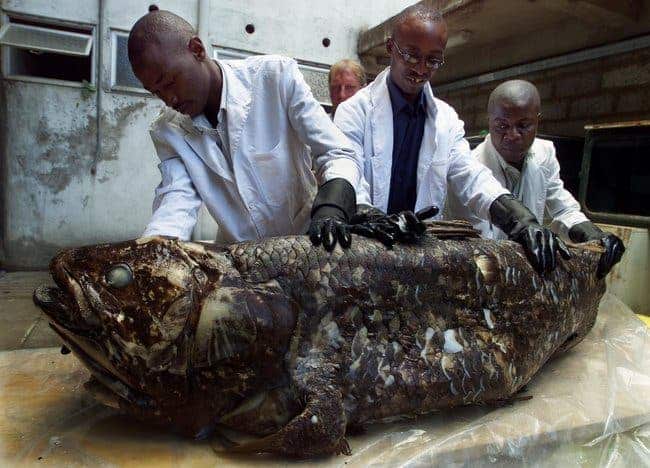 The gene in question is an enhancer that was present in both coelacanths and four-legged creatures, but missing in other fish, which helps in the formation of limbs in animals during the embryonic stage. The gene is not used by the coelacanth itself, since it lies in the “dark matter” side of its genome, responsible for turning genes on or off, but with no protein coding. They then inserted the coelacanth enhancer DNA into mice.

“It lit up right away and made an almost normal limb,” said Neil Shubin, meaning that the coelacanth gene enhancer successfully encouraged the mouse genes to make a limb. Dr. Shubin, a member of the team, is a paleontologist at the University of Chicago.

In addition, the researchers also found a gene related to those that, in animal species, build the placenta. Being a fish, of course the coelacanth doesn’t have a placenta, its blood-filled eggs are very large however, and hatch inside the fish.

The coelacanths aren’t the only primitive fish that might reveal secrets scientists can use to unravel tetrapod evolution. Another fish, the lungfish, is also studied by researchers, however it’s genome has 100 billion DNA units in length, compared to only 2.8 billion both the coelacanth and human genome have. As such, the lungfish’s genome can’t be decoded with present tech.

The findings were reported in an article published in the journal Nature.