Maybe the most amazing of social insects, ants use complex cues of pheromones to determine to which cast in the colony each individual ant belongs to. A team at University of California at Riverside found ants do this by sniffing out hydrocarbon chemicals present on their cuticles (outer shell). These cues are extremely subtle, but the ants can sense them with great sensitivity due to the way they’re hardwired. It’s enough to notice that ants have more olfactory receptor proteins in their genome than we humans have. Amazing! 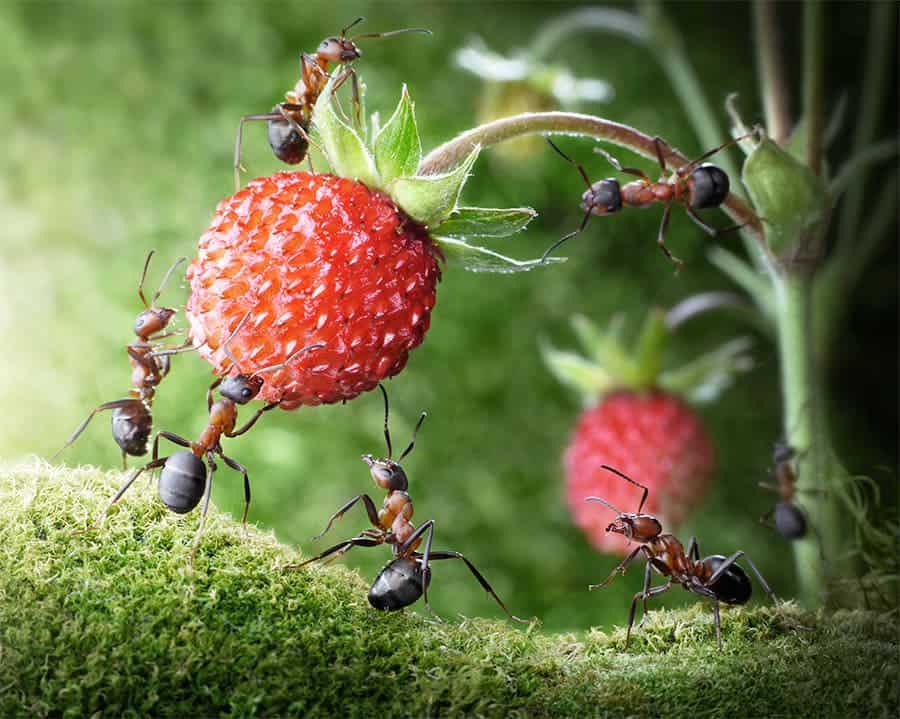 Ants communicate with each other using pheromones, sounds, and touch. Like other insects, ants perceive smells with their long, thin, and mobile antennae. Image: Fragrantica

Previously, some biologists gathered around the hypothesis that worker ants could preferentially smell only non-nestmate cuticular hydrocarbons. The hypothesis suggested that ants aren’t sensitive enough to pick up hydrocarbons from nestmates with which they share too many pheromones. Anandasankar Ray, a neuroscientist and an associate professor of entomology, wasn’t entirely convinced, though.

Him and colleagues at UC Riverside decided to go the root and study antennal neurons and their responses to hydrocarbons on the cuticle. The team individually studied the neural activity of Camponotus floridanus ants as these came in contact with hydrocarbons – long chains of hydrogen and carbon molecules. The method they used is called  electrophysiology, and involved training the ants to associate certain hydrocarbons with sugary water, then measuring the electrical response of the neurons to these reactions. To their surprise, the researchers found the ants could distinguish between various forms of hydrocarbons with extreme sensitivity.

“These guys can smell almost any hydrocarbon we offered to them,” Ray said for Washington Post. “Along with it, we also discovered not only did they have a very extensive olfactory system, they are also able to distinguish very well between very closely related [compounds]. They are able to tell the difference between a hydrocarbon with 25 carbon atoms versus 24 atoms.”

“This broad-spectrum ability to detect hydrocarbons by the ant antenna is unusual and likely a special property of social insects. Using this high-definition ability to smell ‘ant body odor’ the ants can recognize the various castes in the colony as well as intruders,” Ray added.

When you go deeper into this, it starts making sense too. Hydrocarbons are low volatility compounds, meaning you have to be very close to them to pick them up, even if you’re a super sniffer like an ant. If they had gotten their cues from some different compound, say much more volatile, it would have been impossible for the ants to distinguish one another. A language becomes powerful when it is complex and meaning can be conveyed as specifically as possible. That’s what words are for. For ants, their language is chemical and cues have to be very subtle. 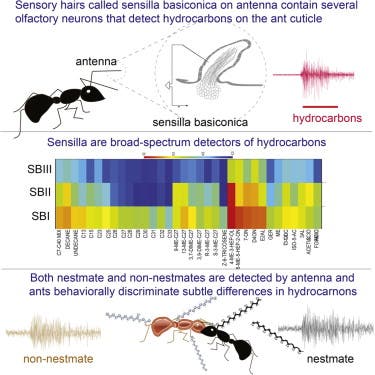 The broad-spectrum sensitivity of Camponotus laevigatus allows these ants to detect CHCs from both nestmates and non-nestmates. Image: Cell Reports

Ultimately, depending on the cast it belongs to (queen, worker, warrior), each ant has its own blend made up of several cuticular hydrocarbons, the authors write in Cell Reports.

“We are closing in to finding the functional roles of these receptors, and, in particular, finding the olfactory receptors that detect pheromones from the queen who regulates much of the order in the colony,” Ray says.