Researchers at The Rockefeller University and Paris University 13 have been studying a peculiar, yet highly fascinating ant species called Cerapachys biroi. The scientists were startled to find that many ants who had stepped out of line and laid eggs at an improper timing were executed by other ants belonging to the same colony, in order to improve efficiency.

C. biroi, along with a few other similar ant species, distinguish themselves by the fact that all worker ants can lay eggs, meaning there are no queens. This most likely caused all members of the species to share completely identical genetic mark-up. This also means something else, that from an evolutionary perspective at least, there would be no reason for ants to compete with one another for breeding rights.

“Similar policing behavior has been observed in several other ant species, and over the past decade it has been debated whether the behavior is a way to repress reproductive conflicts between individuals, or if it serves as a regulatory mechanism to increase efficiency of the whole group,” says Kronauer. “These two factors are very difficult to disentangle in other species. But by examining the behavior in Cerapachys biroi we can conclude that, at least in this species, the executions are a colony-level mechanism, because individual differences that might lead to conflict are controlled for.” 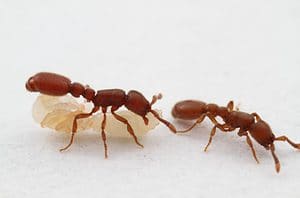 The queenless parthenogenetic ant Cerapachys biroi (subfamily Cerapachyinae) shows army ant-like behavior and is one of the main study systems in our group. The species is a native of Asia and has been introduced globally on tropical and subtropical islands. (c) Rockefeller University

The researchers studied 11 such colonies over the course of 13 months, and over this period they’ve found that ants were executed by other members of the colony after these failed to “stick to the plan”. The C. biroi ants have a reproductive cycle by which all members hatch at the same time, or as supposed to, and once the larvae hatch from the eggs, the ants stop laying eggs and begin to forage for food to feed the hungry larvae. Some worker ants, however, stray away and lay eggs during hatching. Several ants would ambush the perpetrator and bite and sting it for several hours or even days until it died.

“It appears this is an evolutionary mechanism to eliminate individuals who do not respond properly to the normal social cues that tell the ants when to start laying eggs and when to stop,” says Kronauer.

The researchers involved in the study, which was recently reported in a paper published in the journal Current Biology, describe this behavior akin to how the immune system fights cancer cells in the body, making for a fantastic example of how individual creatures join to collectively form one massive social structure, like a complex organism.

“This system in C. biroi shows striking analogies to immunosurveillance on cancer cells,” says Kronauer. “In both cases, the individuals — single ants and cells, respectively — that are not responsive to regulatory signals proliferate uncontrollably and are attacked and removed to protect the higher-level unit. It’s a fascinating example of how evolution converges on analogous solutions to similar problems at different levels of biological organization.”