After just yesterday we wrote that Jupiter’s emblematic Giant Red Storm was quieting down, Neptune’s own giant storm is about to suffer the same fate. 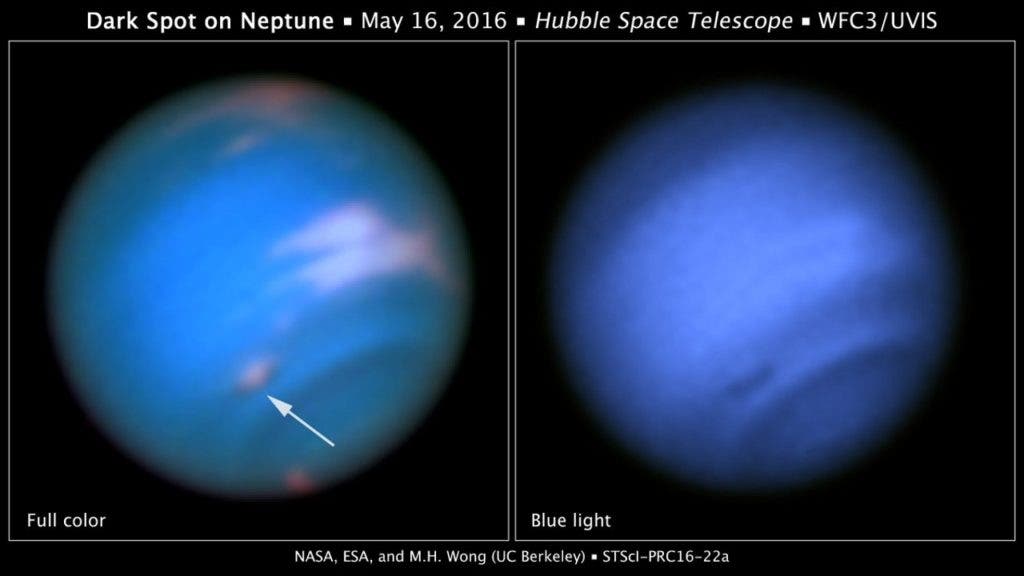 Although not as famous and easily visible as the Great Red Spot, Neptune’s Great Dark Spot (creative names, I know) has its own remarkable history. Also an anticyclonic storm, the first Dark Spot was first observed in 1989 by NASA’s Voyager 2. It was big enough to cover the entire Atlantic, from the US to Europe’s West Coast, but unlike Jupiter’s storm, it had a much shorter lifespan. I say “the first” Dark Spot because, since its discovery in 1989, several others have appeared and disappeared, and the initial one is long gone. Hubble discovered two dark storms that appeared in the mid-1990s and then vanished. The current storm was first observed in 2015, but it’s already shrinking.

We don’t really know that much about Neptune. The farthest planet from the Sun (sorry Pluto) remains largely a mystery, with most of our information coming from remote observations or from the Voyager days. The way it was discovered says a lot about this: Neptune was the first and only planet in our Solar System found by mathematical prediction rather than by empirical observation. Astronomers believe that Neptune has a solid rock core, a mantle consisting of water, ammonia and methane ices, and an atmosphere. The top of the atmosphere is covered by top clouds, while the rest consists of hydrogen, helium, and methane  The Dark Spot is interesting because it allows astronomers to indirectly deduce certain aspects about Neptune’s atmosphere.

The Great Dark Spot is thought to represent a hole in the methane cloud deck of Neptune, generating large white clouds made of frozen methane. The dark spot itself might also contain hydrogen sulfide, a substance commonly found in crude petroleum, natural gas, volcanic gases, and hot springs.

It seems a bit strange if you think about it — why would white clouds, including ice, create a dark spot? Well, it isn’t that they’re necessarily dark, just that they’re less bright than the rest of the atmosphere. Joshua Tollefson from the University of California at Berkeley explained.

“The particles themselves are still highly reflective; they are just slightly darker than the particles in the surrounding atmosphere.” 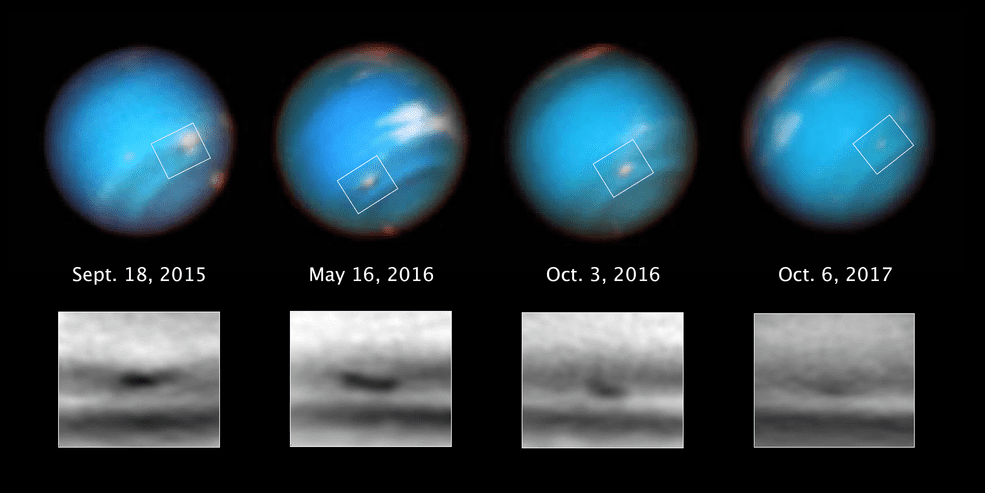 This series of Hubble Space Telescope images taken over 2 years tracks the demise of a giant dark vortex on the planet Neptune. The oval-shaped spot has shrunk from 3,100 miles across its long axis to 2,300 miles across, over the Hubble observation period. Image credits: NASA, ESA, and M.H. Wong and A.I. Hsu (UC Berkeley).

But other than this, we don’t really know much about the nature of these storms. We don’t know why or how they form, and no missions other than Voyager and Hubble are able to visualize them.

“We have no evidence of how these vortices are formed or how fast they rotate,” said Agustín Sánchez-Lavega from the University of the Basque Country in Spain. “It is most likely that they arise from an instability in the sheared eastward and westward winds.”

Unlike Jupiter’s storms, Neptune’s storms don’t last as long. Neptune doesn’t have atmospheric conveyor belts, which keep the storm trapped, and it doesn’t have the proper atmospheric conditions to fuel the storm. So quite soon, the Dark Spot will fade away — but another one will eventually rise up to take its place.

“It looks like we’re capturing the demise of this dark vortex, and it’s different from what well-known studies led us to expect,” said Michael H. Wong of the University of California at Berkeley, referring to work by Ray LeBeau (now at St. Louis University) and Tim Dowling’s team at the University of Louisville.