A major Viking hall measuring over 50 metres in length has been identified near Vadstena in Sweden. Archaeologists from Stockholm University and Umeå University used non-invasive geophysical techniques to identify the hall, and they have a very good idea how it looked like, even without  actually digging it. 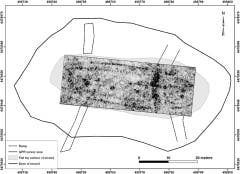 The Viking Age is the period from 793 AD to 1066 AD in European history, especially Northern European and Scandinavian history. Vikings were excellent seafarers, roaming the northern and western seas of Europe both in commercial and military enterprises.

This huge hall was found on the Aska barrow, which was long thought to be a burial mound because of its structure. Archaeologists have now revealed that this was actually the foundation of a very large building, a hall probably ruled by a royal family; this theory is supported by previous excavations, which uncovered some royal tombs in the vicinity of the hall.

“Parallels are known from several of the era’s elite sites, such as Fornsigtuna near Stockholm and Lejre near Roskilde. The closest similarities are however seen in a recently excavated feasting hall at Old Uppsala near Stockholm. Such close correspondences suggest intensive communication between the two sites”, says Martin Rundkvist of Umeå University.

The building was over 50 meters long and about 14 meters wide, equipped with double walls and four entrances. The measurements also indicate a large fireplace at the centre of the floor, which is a clear sign that this was a significant hall, and no ordinary building. 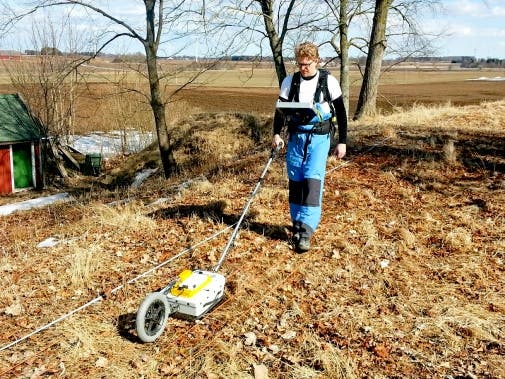 The study was conducted using geophysical methods – more specifically, a technique called ground penetrating radar. Ground Penetrating Radar (GPR) uses radar pulses to image the subsurface. This nondestructive method uses electromagnetic radiation in the microwave band and detects the reflected signals from subsurface structures, basically creating a map of the underground. In modern archaeology, it is very important to detect structures without having to actually dig them. This not only saves a lot of time and money, but it also helps preserve these wonders instead of potentially destroying them during the excavation.

“Our investigation demonstrates that non-invasive geophysical measurements can be powerful tools for studying similar building foundations elsewhere. They even allow scholars to estimate the date of a building without any expensive excavations”, says Andreas Viberg of the Archaeological Research Laboratory at Stockholm University who directed the fieldwork.