It took scientists a while before they realized the enormity of their discovery. Aside from the temple itself, archaeologists have also discovered a trove of artifacts, including statues, coins, and pottery.

The discovery was made in Egypt’s Western Desert, some 348 miles west of Cairo and 200 miles south of the Mediterranean Sea, in the Siwa Oasis. As archaeologist Sarah Parcak explained, it’s not every day that you find this kind of temple.

“What’s amazing is you don’t tend to hear every day of new temples found in Egypt,” space archaeologist Sarah Parcak, who isn’t involved in the dig, told Elaina Zachos at National Geographic. “It’s going to shed more light on the history of Siwa Oasis.”

[panel style=”panel-info” title=”Panel title” footer=””]Some 2,200 years ago, Egypt already had a rich history, but was in a state of decline. Ramesses III, widely considered the last “great” pharaoh from the New Kingdom, who ruled between 1279–1213 BC, was struggling with dwindling finances and wars with the Sea People, who invaded Egypt by land and sea.[/panel] 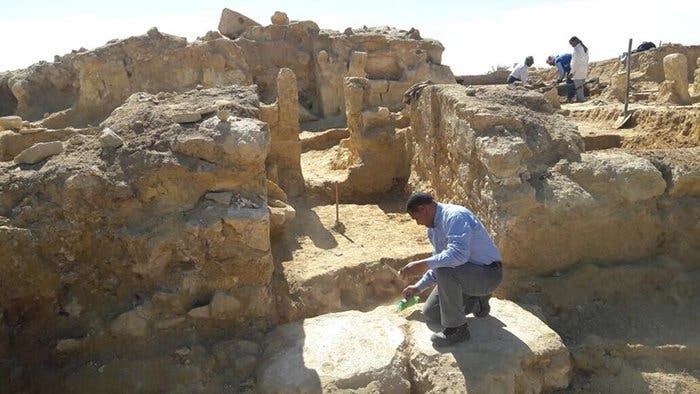 The historical timeline of the oasis isn’t clear, but it seems that it has been inhabited for at least 12,000 years. However, it’s been one of the most isolated Egyptian settlements, deep in the desert — but not isolated from the influence of other cultures. The newly found temple dates from between 200 BCE and 300 CE, a period when Egypt was under Hellenistic and then Roman rule, thus explaining the nature of the temple. During this period, the influence of Ancient Greek and Roman people was felt in all layers of Egyptian life, including architecture, but not many buildings remain from that time, making this finding extra special.

Within the temple, archaeologists have uncovered a sculpture of a man’s head and two limestone lion statues, as well as impressive pottery and lots of coins. The total extent of the temple is not yet known, and the temple hasn’t been dated, but archaeologists believe that the it may offer valuable information about the Greco-Roman period in Egypt.

“I’m hopeful that this excavation team is going to uncover the settlements or the houses of the priests,” Parcak says.

Interestingly, the oasis is most known as the location where the Greek king Alexander the Great consulted the oracle of Ammon. Unfortunately, history didn’t record what Alexander asked and what the oracle answered.

The archaeological dig is still a work in progress, and researchers expect more findings in the future. Ayman Ashmawi, the head of the ministry’s Ancient Egyptian Antiquities department, says several other digs are planned for this year.