An ornamented bâton percé recovered by archaeologists at a site in Gołębiewo, Poland, hints at a much greater interregional collaboration in Central Europe in the Mesolithic than previously assumed. 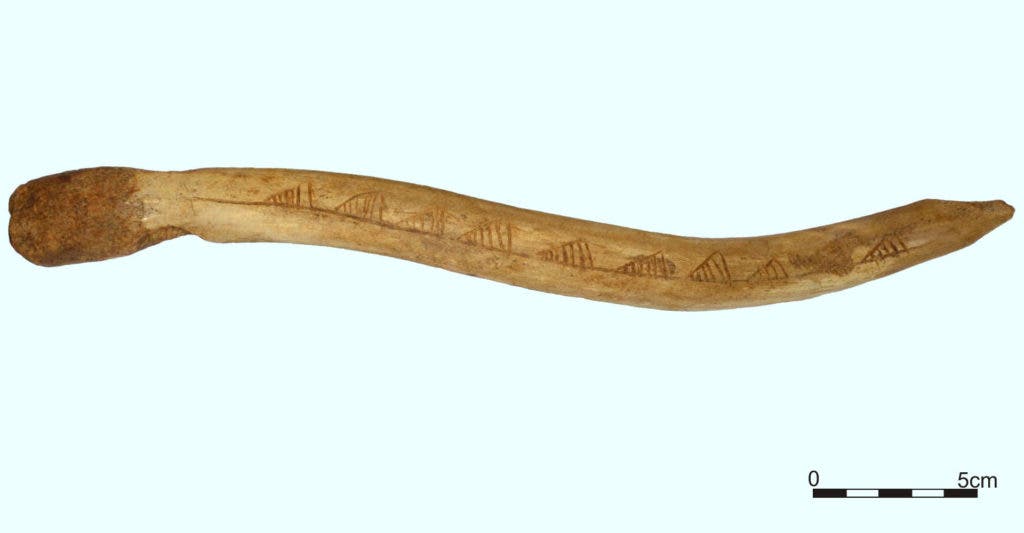 Bâton percé’s are a bit of a pickle, archaeologically-speaking. The term refers to a very specific class of prehistoric artifacts, which are made from a length of antler with a round hole drilled in one end, and often adorned with abstract or animal designs. So far, so good, but their purpose still remains a mystery. The debate is quite old and quite heated. These batons were initially known as ‘de commandement’, or ‘of command’, as archaeologists believed they acted as a scepter to indicate status and power. Since then, the term has fallen out of use as it was more of an assumption rather than a deduced role, and a stretch at that. As André Leroi-Gourhan wrote in 1967, calling it a rod of command conjures the image of “an aged general” busy directing “an assault on a mammoth.”

Our current best bet is that they were spear-throwers, and until we can be sure, we’ve taken to calling them bâton percé, or, ‘pierced rod’.

“The ornaments on its backside were made in a horizontal arrangement along the axis of the product by cutting or carving,” the authors, led by Nicolaus Copernicus University researcher Grzegorz Osipowicz, write. “They cover an area from the drilled perforation to the point located approximately 3 cm above the base of the bâton percé.”

“Originally, the ornaments covered 10 asymmetric triangles with oblique striations similar in shape and size, situated in a horizontal line, the so-called triangles on a line, filled with oblique shading. The second lowest triangle was partially removed (by whittling). All triangles are filled by 4 to 6 incisions (mostly 5) that are parallel to the shortest side.”

The first step the team took was to discover the origin of the antler used in the rod came from. Dr. Osipowicz and his colleagues performed DNA and isotope analyses on the artifact, and report the antler is from a reindeer (Rangifer tarandus). Dispersion analysis estimate that at the time this item was produced (during the early Holocene), reindeer range was limited to northern Scandinavia and north-western Russia.

Sadly, the exact route the antler followed from North Karelia to Central Poland, and the reason why it was transported “remain impossible to determine conclusively.” However, the findings are still quite exciting. They’re the first real evidence of a flow of goods between groups in the early Holocene over such great distances. The finding joins the discovery of complicated trading networks in stone-age Vietnam and early Copper Age-Europe, showing yet again that ancient people weren’t the reclusive, fragmented bunch that we usually imagine them as.

The paper “Origin of the ornamented bâton percé from the Gołębiewo site 47 as a trigger of discussion on long-distance exchange among Early Mesolithic communities of Central Poland and Northern Europe” has been published in the journal PLOS One.