An international team of archaeologists unearthed a treasure trove of reptile and amphibian fossils in the Parnaiba Basin of north-eastern Brazil. The fossils are some 278 million years old, corresponding to the Permian period, when all the continents we know today were still fused together. 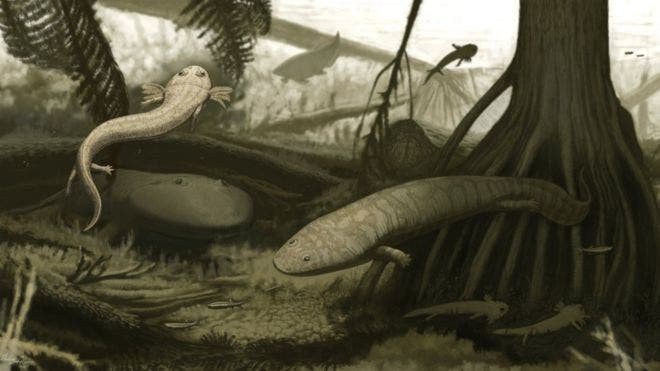 This illustration shows the two new amphibian species, T. anneae (left) and P. nazariensis (right), with one of the larger “rhinesuchidae” lurking in the background.
Image via bbc

Among the findings were two new species of “dvinosaurs,” ancient relatives of modern salamanders measuring about 40 centimeters in length, with preserved fangs and gills. South America’s oldest ever terrestrial reptile skeleton was also retrieved from the site.

Very little is currently known of the fauna and flora of the southern tropical regions of Pangaea during the Permian. Fossil finds for this period are exceedingly rare, and researchers are anxious to fill the gaps in the evolutionary history of the area. But it may be that this last fossil — of a lizard-like creature named Captorhinus aguti — that may be the crowning jewel of the site:

Previously only found in North America, discovering C. aguti here allows scientists to better understand the Permian era — up to now, it was described predominantly by North American and European fossils.

“This discovery is remarkable as most of what we understand about the evolution and adaptation of amphibians through time is based on animals located in Europe and North America,” said Dr Martha Richter from the Natural History Museum in London.

“Now that we know that their distant relatives inhabited a vast lake system in the tropical region of the super continent Pangaea… we can find out more about their abundance, paleontology, and how wide their distribution away from the equator was,” she concluded.

The researchers described one of the newly found fang-and-gill amphibian, dubbed Timona anneae, as being like a cross between a Mexican salamander and an eel.The other amphibian, Procuhy nazariensis, was probably closely related to it but fewer bones have been found and its anatomy remains unclear.

Both species appear to have spent their entire lives in the water.

The team also recovered skull remains belonging to another, much larger amphibian, part of the rhinesuchidae family described up to now in South African fossils. The animal was about as big as a medium-sized dog, scientist report. 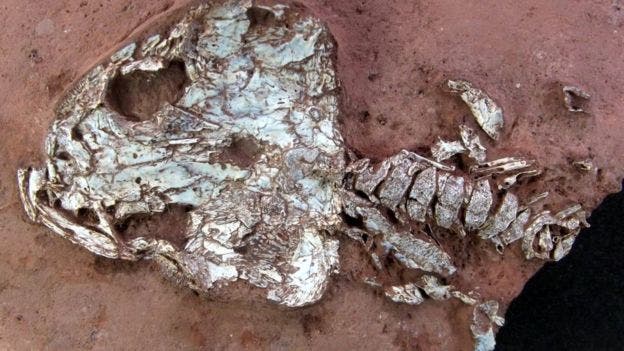 This variety of fossils help researchers get an idea of how prehistoric animals dispersed and evolved.

“Fossils from classic areas in North America and Europe have been studied for over a century, but there are long-standing questions about how different animal groups dispersed to other areas,” said another of the paper’s authors, Dr Ken Angielczyk from the Field Museum in Chicago, US.

“Exploration in understudied areas, such as north-eastern Brazil, gives us a snapshot of life elsewhere that we can use for comparisons. In turn, we can see which animals were dispersing into new areas, particularly as an ice age was ending in the southern continents and environmental conditions were becoming more favorable for reptiles and amphibians.”