Some 35,000 years ago, a Neanderthal carved some lines into a piece of rock, immortalizing what researchers now believe to be evidence that his kind was capable of symbolic thought. 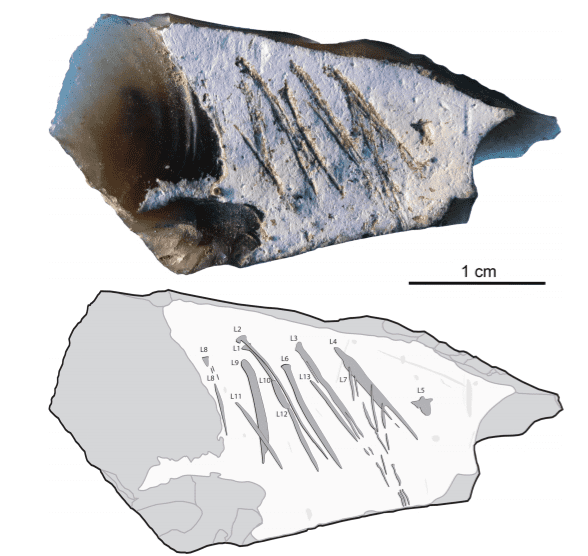 The idea of an unthinking Neanderthal brute has long been disproven by now. We now have clear evidence that Neanderthals were just as intelligent and capable as early humans, if not more so. Now, there is growing evidence that aside from being quite capable, Neanderthals were also capable of symbolic thought — a type of abstract thinking in which symbols or images are used to represent objects, persons, and events that are not present.

In understanding this, carved stone artifacts are extremely important, offering clues on human culture and cognition, as well as abstract thinking. For instance, several sites from the Middle and Lower Paleolithic across Europe and the Middle East have yielded carved flint or chert flakes, including some remarkable findings from Neanderthal sites. But the problem is always the same: how do you determine the action that created the carvings? Was it an accidental scrape, or a purposeful engraving? If it was purposeful, was it a practical purpose, a ritual, or something completely different?

To solve these questions, Ana Majkic from the University of Bordeaux, France, and colleagues used state of the art instruments to assess the structure and patterns of the engraved ridges, developing a framework of potential causal actions.

They started out with a broad list, Majkic tells ZME Science, considering a wide range of potential sources such as marks left on a cutting board, hammer, grinding stone, or simply a way to recover the flint nodules. They also considered more specific uses, such as a way to indicate to a novice where to strike, doodling, playing some kind of game or communicating a symbolic meaning.

“Even when it is possible to demonstrate that the engravings are ancient and human made, it is often difficult to distinguish incisions resulting from functional activities such as butchery or use as a cutting board, from those produced deliberately, and even more difficult to identify the scope of the latter,” researchers write.

They carried out a microscopic analysis of the cortex (the soft outer layer of the rock) and the features themselves, moving on to a 3D reconstruction, and started ruling out possibilities. The location of the engraving and the way in which the lines were produced indicated that the rock was engraved after the flake was detached from the core, thus ruling out the causes that may have led to marking the cortex of a nodule. Although flat, the cortex was too small to use as a chopping board. The ridges also aren’t consistent with tools like hammers or axes, and so on. Step by step, they showed not only that the carvings were made with a clear intent, but also that they were made by a skilled individual. The precision with which engraving was executed also indicates very good hand-eye coordination and motor skills employed with effort, attention to detail, and an intent to frame the incise in a particular way.

Lastly, the results were consistent with the “possible representational interpretation of the object” — in other words, it’s plausible that the Neanderthal(s) who made this wanted to symbolically represent something.

“The microscopic analysis and 3D reconstruction of the grooves on the cortex of this small flint flake, demonstrate that the incisions represent a deliberate engraving made by a skilled craftsman, probably with two different points. The lines are nearly perfectly framed into the cortex, testifying of well controlled motions. This is especially the case considering the small size of the object, which makes this a difficult task,” the study continues.

“The production of the engraving required excellent neuromotor and volitional control, which implies focused attention. Evaluation of the Kiik-Koba evidence in the light of the proposed interpretative framework supports the view that the engraving was made with a representational intent,” researchers conclude.

Lastly, Majkic and her colleagues hope that the methodology can be extended to other similar artifacts. For now, evidence is piling up that Neanderthals were capable of symbolic representations, but there’s still a long way to go before that can be definitively concluded.