The ancient Greek shipwreck that produced the awesome Antikythera mechanism, hailed as the world’s first analog computer (being almost two millenia old), had archaeologists’ collective pants full of ants and it seems that their enthusiasm was well placed. The shipwreck is slowly yielding new artifacts, offering a glimpse into the lifestyles of the ancient “1%” in the Hellenic peninsula. 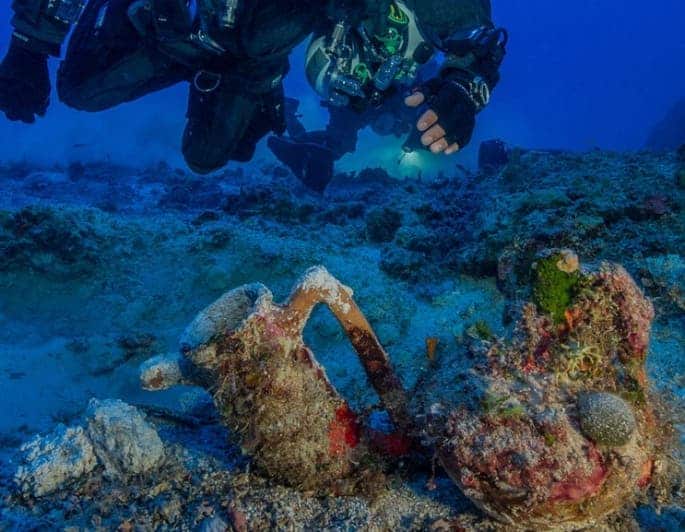 Archaeologists recovered several artifacts from the wreck that they have started to name “the Titanic of the ancient world” due to the luxurious nature of its cargo. The findings include a bone flute, a bronze armrest believed to have originated from a throne, fragments of fine glassware and ceramic and even a board game that was popular among ancient Greeks. Marine archaeologist Brendan Foley from the Woods Hole Oceanographic Institute, the project’s co-director, believes that the wreck still has a lot more to offer scientists, with ever single dive unearthing (unwatering?) new items that show the level of comfort and sophistication the rich and powerful enjoyed in the time of Ceasar.

The ship sunk sometime in 65 B.C off the coast of the Greek island of Antikythera, and was found by sponge divers in 1900. The wreck is considered one of the world’s biggest underwater archaeological projects, and Woods Hole is now conducting the first systematic excavation of the site, using data surveyed by a robotic submersible last year.

And it seems the teams have good fortune on their side too. A spokesperson for the institute said good weather allowed their divers to perform more than 60 dives across the site last month alone. Foley also adds that they were indeed lucky this year, as the finds that were excavated are within their context, bringing them an opportunity to take full advantage of archaeological information.

The new finds also prompted the divers and the scientists to dig deeper into the ocean floor where one of the last searches carried out last year that used this current technique yielded small bronze pieces, a wine jug and a possible part of a cooking pot. The team believes that more significant finds await them until next year’s expedition begins.

You can see the full list of all artifacts found in the site on WHOI’s page.

One thought on “Luxurious Greek artefacts unearthed in the Antikythera site”