Roman gladiators – some of the most feared warriors in history were mostly vegetarian, a new anthropological study has shown. 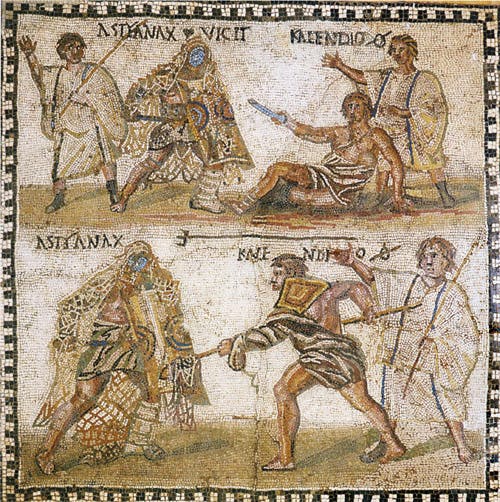 Gladiators fought to entertain audiences in the Roman Republic and Roman Empire in violent confrontations; they fought each other, wild animals, and convicted criminals. Some gladiators were volunteers who risked not only their social standing, but also their lives, but most of them were actually slaves, schooled under harsh conditions, socially marginalized and even as they were admired for their fighting prowess, they were still despised as inferior citizens. But even as gladiators themselves were marginalized, the idea of a gladiator was immortalized in pieces of art, from commonplace objects to magnificent pieces of art.

You’d expect someone with such a brutal “profession” to have a pretty brutal diet – eating lots of meat, living for the moment, feasting as much as possible. But a new study on gladiator bones revealed that gladiators enjoyed a diet of mostly grains and meat-free meals, suggesting that even athletes relying on their strength and speed can thrive with a vegetarian diet.

The study was conducted by researchers from the Department of Forensic Medicine at the MedUni Vienna in cooperation with the Department of Anthropology at the Institute of Forensic Medicine at the University of Bern and the bones came from Ephesos (today’s Turkey), being dated at 2nd and 3rd century B.C. At the time, Ephesos was the Roman capital of Asia, with a remarkable population of over 200,000. 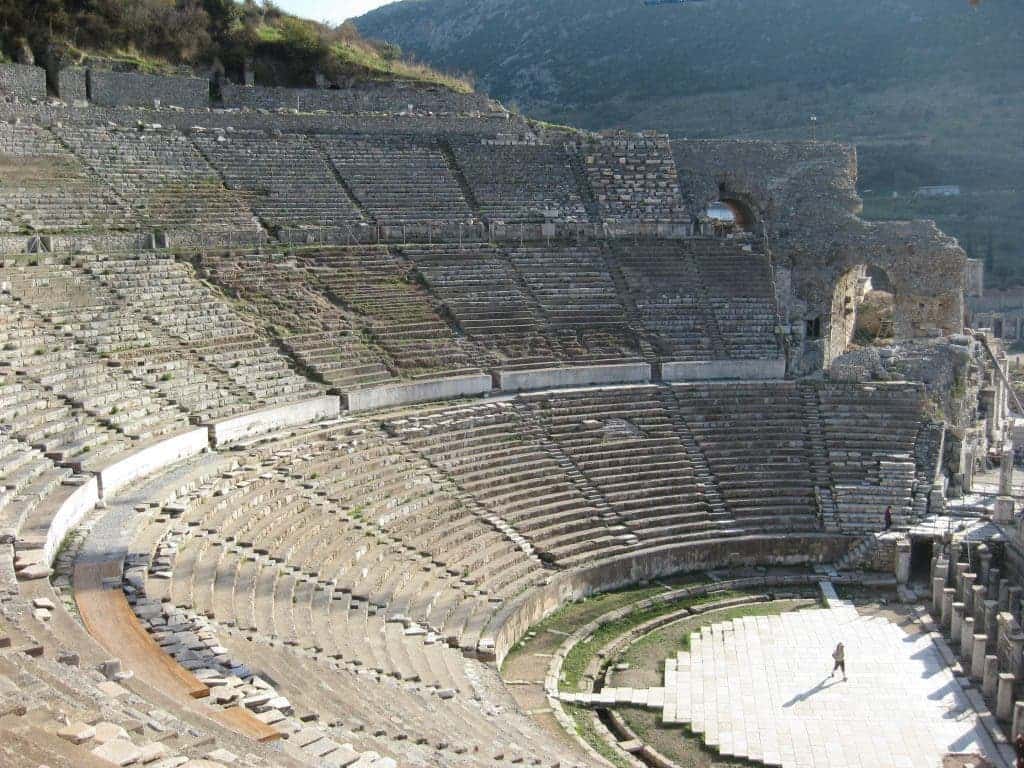 Image from Ephesus. People gathered in the colosseum theater to watch gladiators fight.

Contemporary accounts of gladiator life sometimes refer to the warriors as hordearii–literally, “barley men” – and there is more true to that statement than initially thought. Karl Grossschmidt, a paleo-pathologist at the Medical University of Vienna subjected bits of the bone to isotopic analysis, a technique that measures trace chemical elements such as calcium, strontium, and zinc. By checking what chemical elements their bones have, you could reverse trace what they ate – and Grossschmidt found that they ate much more vegetables than animal protein. But they didn’t do this due to a personal belief or because they weren’t allowed to eat meat. Gladiators, it seems, were pretty fat – that’s what their bones indicate anyway. They ate a lot of carbohydrates, which helped them in two ways: it gave them strength and protected them from wounds.

“Gladiators needed subcutaneous fat,” Grossschmidt explains. “A fat cushion protects you from cut wounds and shields nerves and blood vessels in a fight.” Not only would a lean gladiator have been dead meat, he would have made for a bad show. Surface wounds “look more spectacular,” says Grossschmidt. “If I get wounded but just in the fatty layer, I can fight on,” he adds. “It doesn’t hurt much, and it looks great for the spectators.”

But this diet had a big drawback – it left gladiators with a calcium deficit. If you don’t have enough calcium in your bones, they can simply snap, or at the very least, not support your muscles properly. But here’s the kicker: the gladiator bones had “exorbitant” levels of calcium compared to the general population. So this almost certainly means one thing – in order to compensate for this deficit, they drank vile brews of charred wood or bone ash, both of which are rich in calcium.

“Plant ashes were evidently consumed to fortify the body after physical exertion and to promote better bone healing,” explains study leader Fabian Kanz from the Department of Forensic Medicine at the MedUni Vienna. “Things were similar then to what we do today — we take magnesium and calcium (in the form of effervescent tablets, for example) following physical exertion.”

The clear formula for the drink is not clear, but whatever they used, it worked. In a way, gladiators pioneered the usage of sports drinks.

“Many athletes today have to take calcium supplements,” he says. “They knew that then, too.”

If anything, this is yet another indication of how rough the gladiator life was. Compared to most of the world, life in the Roman Empire had some obvious perks, but not for gladiators. The crowds loved them when they won, artists revered them, but in day to day life, they were outcasts who risked their life on a regular basis with little recognition outside the arena. Wounds were also quite common.

“The proportion of wounds to the skull was surprising, since all gladiatorial types but one wore helmets,” says Harvard’s Coleman. Gladiators usually fought one-on-one, with their armor and weaponry designed to give opposite advantages 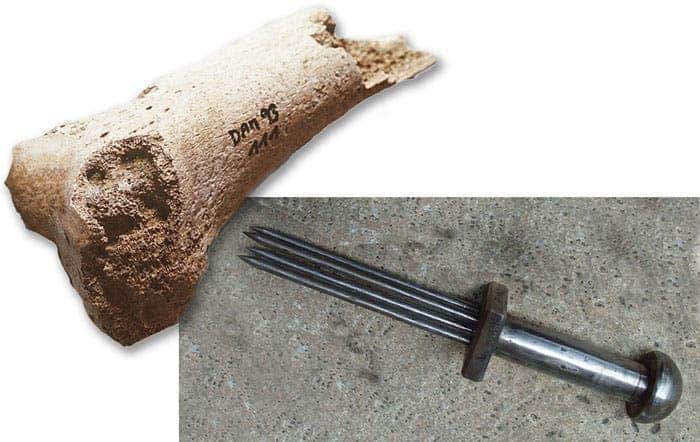 The existence of the four-pointed dagger (replica pictured here) was known from inscriptions, but its function was a mystery until this crippling quadruple knee wound was identified. (Courtesy Karl Grossschmidt)

There were different classes of Roman gladiators, and a fight usually comprised of warriors from different classes. For example, an agile lightly armored helmetless retiarus with a net and trident would be pitted against a plodding murmillo wearing a massive helmet with tiny eye slits and carrying a thick, long shield. Some match-ups were more common than others. The retiarius was traditionally pitted against a secutor or, possibly on rare occasions, a murmillo. Despite significant differences in armor and weaponry, modern analysis and reconstructions showed that the different type of gladiators were balanced – no class had a decisive advantage over another class, as bone wounds of all types have shown.

One thought on “Roman Gladiators were mostly Vegetarian, Drank Sports Drinks from Bone and Ashes”