A recent fossil found at a building site in southern China revealed a new species of feathered dinosaur, which was nicknamed the “Mud Dragon”. 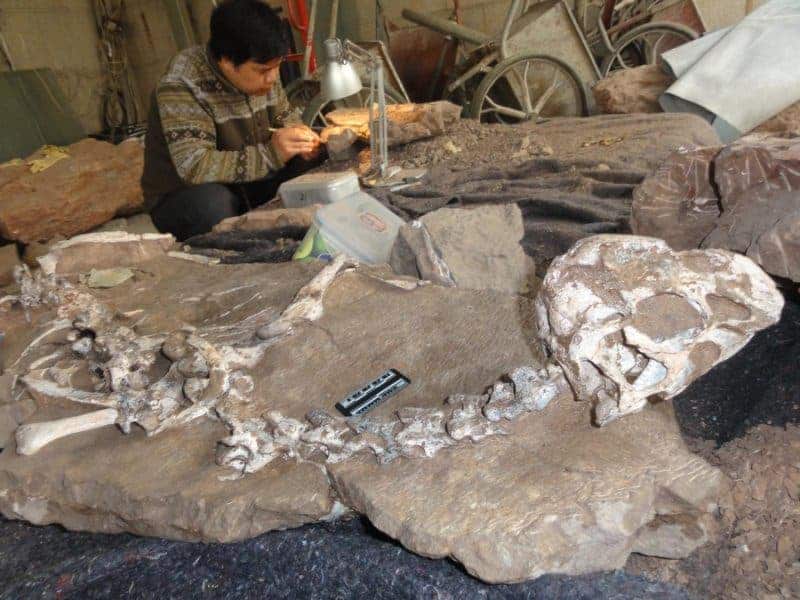 The fossil almost went undiscovered. It was found during a school building project at a site near Ganzhou, in southern Jiangxi, China, after construction workers detonated an explosive charge. It remains in a remarkable well-preserved condition despite some damage done by the dynamite and is almost fully complete. The new, bird-like species was named Tongtianlong limosus, meaning ‘muddy dragon on the road to heaven’.

The two-legged animal belongs to a family of feathered dinosaurs called oviraptorosaurus, who gave up fangs to evolve toothless heads and sharp beaks. Some, this new species included, also had crests of bone on their heads, likely used as display pieces to attract mates and influence rivals, reminiscent of some modern birds such as the cassowary. The Mud Dragon was preserved almost intact, lying on its front legs with the wings and neck outstretched. Scientists speculate that it died in this pose after becoming mired in mud about 66-72 million years ago.

Oviraptosaurs were one of the latest species to appear — they reached their heyday just before the dinosaurs’ mass extinction. Fossil findings suggest that 15 million years before the meteor hit, this family of dinos was experiencing a population boost and was diversifying into new species. It likely was one of the last groups to diversify before the asteroid impact 66 million years ago, killing off all non-bird dinosaur species. The researchers from China and the University of Edinburgh, who studied the find, believe it will help us better understand how some of the last dinosaurs ever flourished.

“This new dinosaur is one of the most beautiful, but saddest, fossils I’ve ever seen,” said Dr. Steve Brusatte of the University of Edinburgh’s School of GeoSciences.

“But we’re lucky that the ‘Mud Dragon’ got stuck in the muck, because its skeleton is one of the best examples of a dinosaur that was flourishing during those final few million years before the asteroid came down and changed the world in an instant.”

The full paper “A Late Cretaceous diversification of Asian oviraptorid dinosaurs: evidence from a new species preserved in an unusual posture” has been published in the journal Scientific Reports.