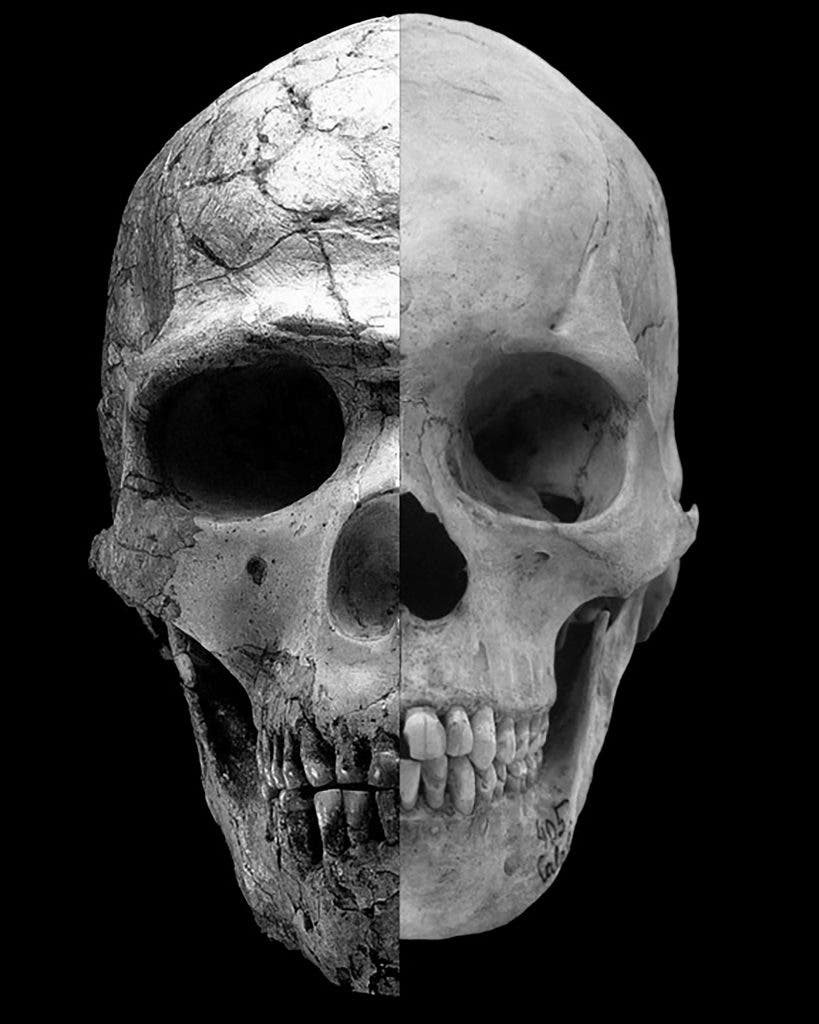 A composite image shows the facial differences between an ancient modern human with heavy brows and a large upper face and the more recent modern human who has rounder features and a much less prominent brow. The prominence of these features can be directly traced to the influence of the hormone testosterone. Photo Credit: Robert Cieri, University of Utah

According to a new study published in Current Anthropology, our transition into modern civilization has probably coincided with a drop in testosterone. It’s very likely (though not entirely proven) that it was the transition to civilization that precipitated the drop.

University of Utah biology graduate student Robert Cieri analyzed 1,400 ancient and modern human skulls, showing that some 50.000 years ago, when human civilization was starting to be developed, a drop in testosterone also came into place. Skull shape and testosterone levels can be associated, and the decrease in testosterone can be “mapped” by changing skull anatomy.

“Humans are uniquely able to communicate complex thoughts and cooperate even with strangers,” Cieri says. “New research on fossilized Stone Age humans from Europe, Africa and the Near East suggests these traits are linked, developed around 50,000 years ago, and were a driving force behind the development of complex culture.”

It is currently accepted that modern humans, Homo sapiens, appeared about 200.000 years ago, but evidence of civilization, such as symbolic or cultural artifacts and modern tools were only found from 50.000 years ago – about the time when their faces started to become more feminine.

“Human fossils from after modern behavior became common have more feminine faces, and differences between the younger and older fossils are similar to those between faces of people with higher and lower testosterone levels living today,” Cieri says.

It is important to note that lower testosterone is associated with tolerance and cooperation in bonobos and chimpanzees, and with less aggression in humans. It seems very plausible that as humans started to group up in larger and more interconnected settlements, they needed to find less violent ways to sort out their problems – and in the long run, the non-violent path won. This may be the cause, perpetuated by natural selection, or there might be something else involved

“Whatever the cause, reduced testosterone levels enabled increasingly social people to better learn from and cooperate with each other, allowing the acceleration of cultural and technological innovation that is the hallmark of modern human success,” Cieri says.

One thought on “Transition to civilization led to drop in testosterone”