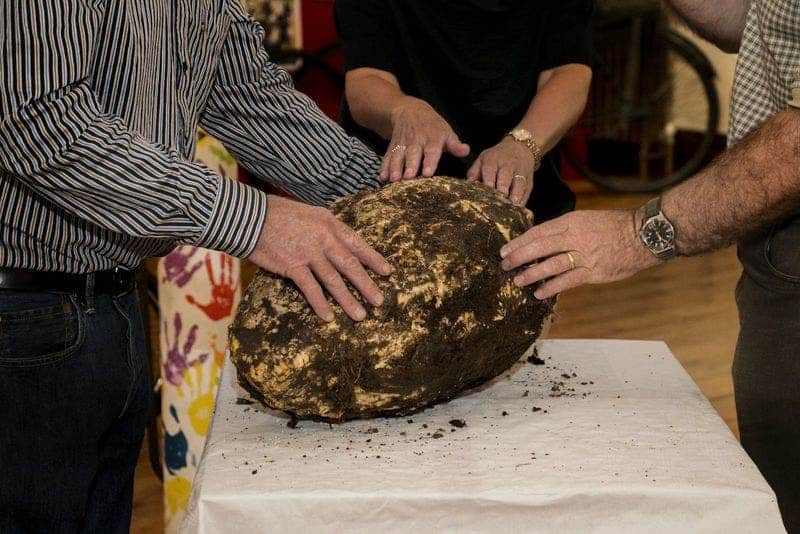 A prehistoric 10 kg lump of butter was unearthed by Jack Conway in Ireland. The finding has been given to the National Museum, where it will be preserved. Andy Halpin, assistant keeper in the museum’s Irish Antiquities Division, said that the finding isn’t extremely rare, as ‘bog butter’ was actually quite common back in the day.

Until 2003, scientists and archaeologists were not quite sure of the origin of bog butter, but Bristol researchers discovered that some samples of the “butter” were dairy products, while others were animal fat. Preserving butter and fat was difficult without a fridge, so people often went to strange lengths to preserve it. In Great Britain and Ireland especially, people used to put the products in wooden boxes or animal hides and bury them in peat or bogs, where the temperature was cooler.

Before this, researchers had found bog butter from several centuries ago, often going as far as to the 6th or 7th century AD. But this particular piece is much older, and it wasn’t even encased in wood: it dates from 2 millennia ago. But even so, bog burial is so effective that the product is probably still edible today, though Halpin wouldn’t advise it.

‘Theoretically the stuff is still edible – but we wouldn’t say it’s advisable,’ he said

Some researchers have actually recreated bog butter to see what it tastes like. Modern experiments have revealed that the product seems to be an acquired taste, with “flavor notes which were described primarily as ‘animal’ or ‘gamey’, ‘moss’, ‘funky’, ‘pungent’, and ‘salami’. Of course, this is a far cry from the taste of butter we’re used to but hey – after two thousand years, I’d say that’s probably pretty good.

The oldest known bog butter was found in Tullamore, County Offaly, thought to date back about five millennia. It still had a faint smell of dairy.