You’d think the world’s biggest pyramid is in Egypt – after all, they do call it The Great Pyramid — but the largest such structure is actually in Mexico, hidden beneath a hill in the nearby town of Pueblo. Known as the Great Pyramid of Cholula, this ancient Aztec temple has a base four times larger than Giza’s, and nearly twice the volume. 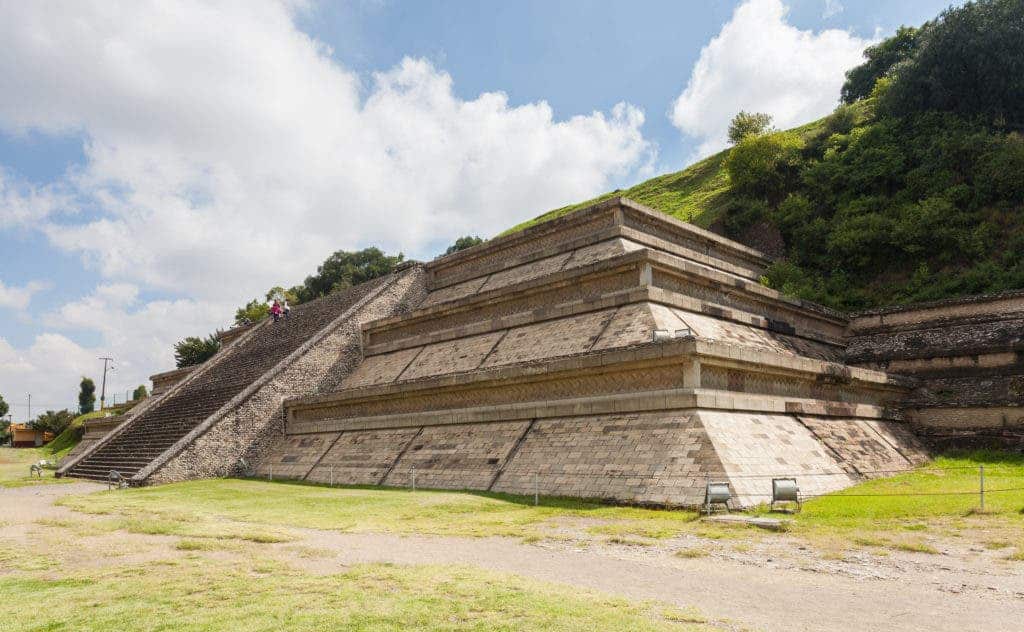 The base of the great Cholula Pyramid. Image by Poco a poco/Mexico.

Why is it so often overlooked?

The Great Pyramid of Cholula, known to natives as Tlachihualtepetl, stands 55 meters (180 ft) above the surrounding plain, and in its final form, it measured 400 by 400 meters (1,300 by 1,300 ft). Its base is four times larger than that of Giza (The Egyptian Great Pyramid) and it has almost twice the volume.

This actually makes it the world’s largest monument ever built. Even the famous Spanish explorer Hernán Cortés missed it completely and erected a church on top of it. Known as La Iglesia de Nuestra Señora de Los Remedios (Our Lady of Remedies Church), the church is still standing to this day.

According to historians, the temple was built to honor Quetzalcoatl, the feathered serpent and the Aztec god of wind and learning, creator of all mankind. After they dedicated such a huge monument to the god and even built a holy city around it, the Aztecs expected divine protection in Cholula — yet they were wrong. But first, let’s look at the history of the Cholula Pyramid. 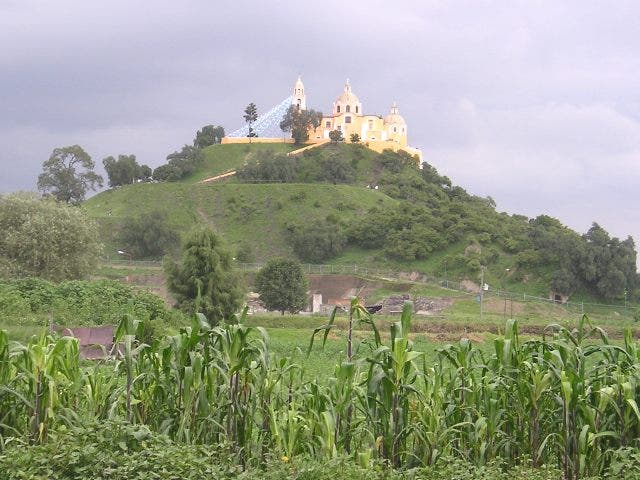 The pyramid now looks like a hill, which is why Cortes and the Spanish army didn’t even see it. They built a church on top of it. Photo by Hajor.

Building the largest pyramid in the world

The origins and stages of the constructions are still a point of debate among archaeologists. However, we do know that the pyramid features six layers built on top of each other, like a Russian doll. As civilizations came and went, they subsequently built on top of what was already laid down. The Aztecs were therefore not the original builders — in fact, the construction started more than a thousand years before the Aztecs emerged, presumably around 300 B.C.

The architects of the temple also took advantage of the natural topography: while the surrounding area basically consists of hills and mountains, the pyramid itself rests on a flat plateau.

The pyramid was built with adobe, a brick-like building material made out of baked mud. Adobe is among the earliest building materials used across the world, and they’re especially sturdy in Mexico’s dry climate.

At this particular site, adobe bricks were made by mixing mud with materials such as straw or sand and smoothed out to allow decorations and paintings. Adobe can become mushy and falter in rainy climates, but in dry, hot climates they can last for thousands of years, as was the case here. The tropical jungle also offered plenty of raw material, rich in organic material.

Artist’s conception of what the pyramid complex might have looked like during its heyday. Photo from the Nordisk familybook.

Construction took place from the 3rd century BC through the 7th century AD, after which the structure was abandoned (the exact date in which it was abandoned is unclear, could be up to the 9th century). It’s not exactly certain who built the pyramid initially. Legend has it a giant built it, but records suggest that the city’s original inhabitants, the Choluteca, laid the first adobe bricks.

The Choluteca were a mixed bunch, with a multi-ethnic background. They were likely quite wealthy, owing to the fact that their capital was a major trade center for thousands of years. Not only did they start building the monument, but they also painstakingly decorated it. After a while, for reasons which aren’t entirely clear, the Cholula pyramid was abandoned, the adobe bricks left to fall victim to nature. Without maintenance, the mud bricks became a growing ground for grass.

The arrival of the conquistadors

Fast forward a few hundred years. The Aztec empire is one of the richest in the world, but that won’t prevent their downfall.

When Hernan Cortes, the conquistador, arrived at Cholula, he called it “the most beautiful city outside of Spain.”

For the Aztecs, the city was sacred. They did little to invest in its defense because they thought Quetzalcoatl, the great god, would protect them from any harm — but they were wrong. The Spanish slaughtered around 3,000 people in a single hour, effectively wiping over 10% of the city’s population and leveling much of the city’s buildings. So why then was the big pyramid left standing?

Well, actually, they didn’t see it. Well, they did see it, but they didn’t realize what they were looking at. By the time they got there, the external bricks had turned into mud and vegetation grew on them like it would on any hill. In fact, Cortes built a church right on top of what he thought was a hill. It’s unclear if the Aztecs of those times were aware that tall hill was actually concealing the great pyramid build by their forefathers. 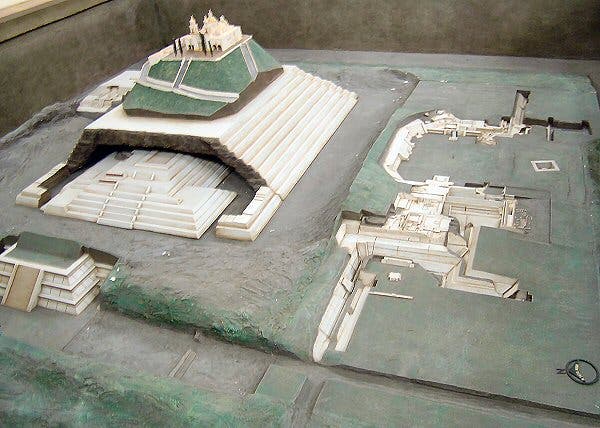 A model of how the entire structure looks like. Photo by Mhaesen.

The full scope of the grand Cholula pyramid remained a secret until the early 1900s when locals started to build a psychiatric ward nearby. By 1930, archaeologists had arrived at the conclusion that the hill was, in fact, a pyramid covered in vegetation and mud. In 1954, the total length of discovered tunnels came to approximately 8.0 kilometers (5 miles).

However, the church on top of the hill was already an important pilgrimage site, and when the pyramid was revealed, it once more became a key point for indigenous spirituality, so archaeologists decided not to fully excavate it. Today, researchers are using geophysical techniques and remote sensing to study the pyramid non-invasively.

Now, more than 2,300 years after its construction, Cholula is once more a major point of interest. People from nearby areas and all over the world visit it but it’s still not as popular as the smaller pyramids of Teotihuacan or the emblematic Egyptian pyramids. Still, thousands flock to see it each year. Ironically, it seems that 500 years after the Spanish invasion, the locals are dealing with another invasion, albeit a more pleasant one: tourists.