Just as today — or a little less often, as we tend to abuse our teeth quite a bit nowadyas – early humans had to deal with cavities. An infected 14,000 year old molar may give us a glimpse into how they treated such afflictions, and is the oldest known evidence of dentistry.

You won’t find any fancy anesthetics or sterile, steel tools here — the procedures were performed with sharp, hand-crafted stone tools in a rudimentary but effective fashion.

The study, published in the journal Scientific Reports, analyzed a molar from a well-preserved 25-year-old male skeleton, whose remains were first discovered in a rock shelter in Belluno, Italy, in 1988. Researchers found evidence that the molar had been infected and was partially treated with sharp, flint tools.

“The treatment went unnoticed for all these years. The cavity was described as a simple carious lesion,” lead researcher Stefano Benazzi from the University of Bologna told Discovery News. 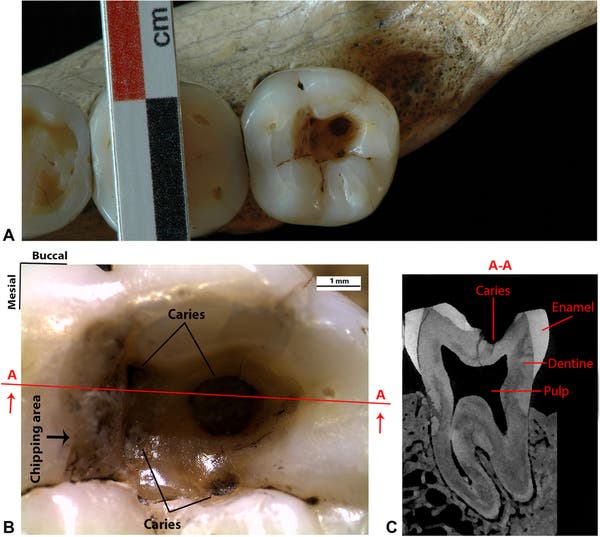 (A) Occlusal view of the RM3. (B) Detailed view of the large occlusal cavity with the four carious lesions and the chipping area on the mesial wall. Section A-A is directed mesio-distally, passing through the larger carious lesion. (C) MicroCT slice of the Villabruna RM3 in correspondence with section A-A.
Image via Nature

“The treatment went unnoticed for all these years. The cavity was described as a simple carious lesion,” lead researcher Stefano Benazzi from the University of Bologna told Discovery News.

Researchers looked at the molar under an electron microscope and found chippings and striations, suggesting intentional removal of material from the tooth using sharp tools. They then attempted to replicate the findings using materials that early humans had access too: wood, bone, and stone.

The tests confirmed that the striations found on the infected tooth were a result of scratching and chipping, with flint producing results most similar to those found on the molar. Researchers also note that the painful procedure occurred while the individual was alive.

“The discovery suggests, moreover, that in the Upper Palaeolithic era, humans were aware of the damaging effects of cavity infections and of the necessity of treating them, using stone instruments to remove the infected material and to clean out the cavity,” Benazzi told an Italian newspaper, Il Resto del Carlino, The Telegraph reports.

The ancient tooth represents “the oldest archaeological evidence of” dentistry, the study notes.

It predates the next oldest-known evidence of a dental procedure by 5,000 years. Researchers suggest the findings may show how early humans adapted the toothpicking technique to early forms of dentistry that included scratching cavities using microlithic points.