Recent fossils unearthed in the Chinese province of Daoxian come to unravel the story of humanity’s spread as we know it today. The find consists of 47 teeth, belonging to modern humans, but what’s really important is their age – they have been dated to 80,000 years ago. This number doesn’t fit with the “Out of Africa” migration theory, holding that humans originate and have spread from the horn of the continent all around the world. The theory as we know it can’t explain human presence in the area for another 20,000 years. 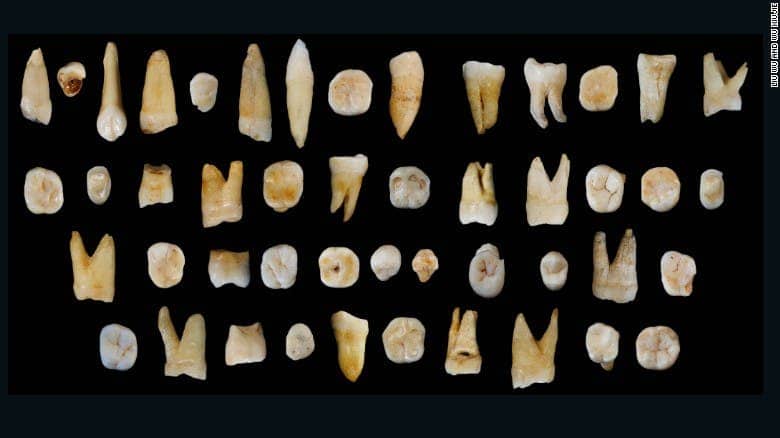 “We need to re-think our models. Maybe there was more than one Out of Africa migration” says Dr. María Martinón-Torres, UCL.

Evidence from several fields of science supports the dispersal of our species from Africa some 60,000 years ago. It is believed that a group of nomads crossed the Red Sea, by taking advantage of the Bab el Mandeb straits’ low water levels, and that from them, all non-African people today originate. But the excavations at Funyan Cave in Daoxian throw a wrench into the workings of this theory:

“It was very clear to us that these teeth belonged to modern humans [from their morphology]. What was a surprise was the date,” Dr María Martinón-Torres, from University College London (UCL), told BBC News. “All the fossils have been sealed in a calcitic floor, which is like a gravestone, sealing them off. So the teeth have to be older than that layer. Above that are stalagmites that have been dated using uranium series to 80,000 years.“

Everything under those stalagmites must be older than 80,000 years; the teeth could even be 125,000 years old, according to the researchers. Animal bones found with the teeth are also typical of the late Pleistocene, the same time period indicated by radioactive dating.

Now, these are not the first fossils of modern humans that predate the Out of Africa migration – some were found in Skhul and Qafzeh caves in Israel, for example. But due to their close proximity to the African continent, they were regarded as nothing more than a failed attempt at dispersal by groups of people who probably went extinct. But discovering modern fossils all the way in China is another thing entirely.

“Some researchers have proposed earlier dispersals in the past,” said Dr Martinón-Torres. “We really have to understand the fate of this migration. We need to find out whether it failed and they went extinct or they really did contribute to later people. Maybe we really are descendents of the dispersal 60,000 years ago – but we need to re-think our models. Maybe there was more than one Out of Africa migration.”

Professor Chris Stringer, working at London’s Natural History Museum, believes that the study will become a “game-changer” in finding out how modern humans spread around the world.

“Many workers (often including me) have argued that the early dispersal of modern humans from Africa into the Levant recorded by the fossils from Skhul and Qafzeh at about 120,000 years ago was essentially a failed dispersal which went little or no further than Israel.”

“However, the large sample of teeth from Daoxian seem unquestionably modern in their size and morphology, and they look to be well-dated by uranium-thorium methods to at least 80,000 years. At first sight this seems to be consistent with an early dispersal across southern Asia by a population resembling those known from Skhul and Qafzeh. But the Daoxian fossils resemble recent human teeth much more than they look like those from Skhul and Qafzeh, which retain more primitive traits. So either there must have been rapid evolution of the dentitions of a Skhul-Qafzeh type population in Asia by about 80,000 years, or the Daoxian teeth represent a hitherto-unsuspected early and separate dispersal of more modern-looking humans.”

“The genetic evidence we have puts strong constraints on some aspects of human history, but less so on the timing of the out of Africa event.” Sais Dr. Pontus Skoglund. Most genetic reconstructions based on modern data relies on assumptions on the mutation rate, for which there are still some real uncertainties. In terms of direct genetic evidence, we already have a 45,000 year-old genome from Siberia (Ust Ishim) and a ~40,000 year old individual from Europe (Oase) that are consistent with being from now-mostly-extinct lineages. ”

“The conclusion is perhaps that the genetics does allow an 80,000 year old East Asian population to contribute some ancestry to present-day people, but I think not very much. It is a very interesting discovery that is hard to fit in our current thinking, but not impossible. We are just starting to cope with this data point.”

Dr Martinón-Torres said the study could also shed light on why it took Homo sapiens another 40,000 years to settle Europe. Perhaps it was Neanderthal presence that kept our species out of the western part of Eurasia, until their numbers started to dwindle; or, maybe it was the cold climate that kept us away.

Skoglund also noted that while modern humans occupied the warmer south of China 80,000 years ago, the colder regions of central and northern China appear to be settled by more primitive human groups who may have been Asian relatives of the Neanderthals.

The full study was published in the journal Nature.

5 thoughts on “Challenging the “Out of Africa” theory, one tooth at a time”