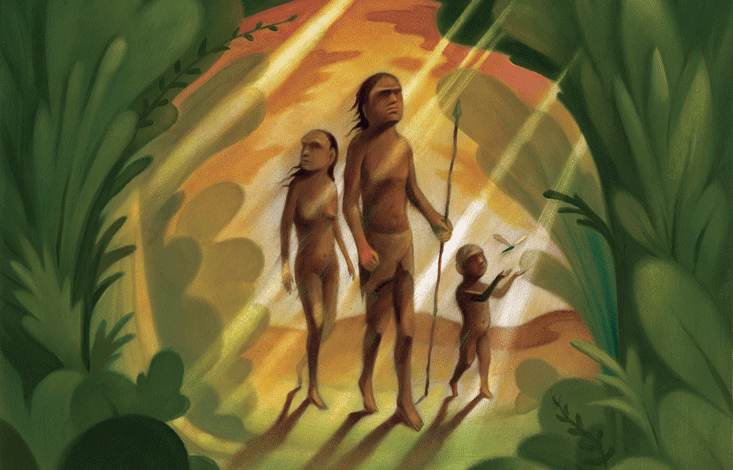 Anthropologists agree that the first human settlers arrived in North America from Asia through Beringia, a vast region stretching from the Lena River in Siberia to the Mackenzie River in the Yukon Territory. These ‘first people’ originated in Siberia, according to palaeogenetic analyses, but it’s still unclear when the first wave of migration happened. Archaeological evidence seems to suggest humans crossed a small land bridge between Siberia and Alaska some 14,000 years ago during the last glacial period. However, a new study that analyzed artifacts collected at the Bluefish Caves suggests the dispersal might have first started during the Last Glacial Maximum, some 25,000 years ago.

The Bluefish Caves, a site consisting of three small caves located in the northern Yukon, first came into the limelight when excavations performed between 1977 and 1987 made a case the site was occupied by humans during the Last Glacial Maximum (LGM). The hypothesis, however, did not stand up to scrutiny and proved controversial. No other sites of similar age were found in Beringia and some scientists disputed the dating, as well as the anthropogenic signature of the bones found there.

Canadian researchers from the University of Montreal revisited the “Beringian standstill hypothesis” and performed  taphonomic analyses of the fauna remains unearthed from the caves beneath a layer of  loess —  “fine particles of aeolian silt which should not produce scratches on bones but can lead to polished surfaces,” the researchers wrote in a paper published in PLOS One. A taphonomic analysis establishes the conditions under which an organism decayed or became fossilized.

The various bones retrieved from the cave were analyzed one by one and cataloged into two groups: those whose alterations were clearly made by natural processes (biological agents, weathering, fractures by large canids, rockfall etc.) and those which bear evidence of potential cultural modification.

Cut marks on the medial side, under the third and second molars, are associated with the removal of the tongue using a stone tool. Credit: PLOS One.

For a bone modification to be identified as a cut mark — and hence evidence of ancient human presence at the Bluefish Caves — it had to fulfill all of the following criteria: shape, trajectory, number of striae, shoulder effect and shoulder flaking, internal microstriations, anatomical location and orientation.

All in all, some 36,000 mammal bones were analyzed by the Canadian researchers, mostly belonging to wolves, lions and, to a lesser degree, foxes. The researchers reckon the caves were probably used as den sites for Ursids in winter and Canids in spring and summer, while the human occupation of the caves was probably sporadic and brief.

Though biological agents and carnivore tooth marks plagued most of these samples, a total of 15 bone samples with cultural modifications confidently attributable to human activities were identified. Another two dozen bones bearing ‘probable’ alterations made by humans suggest less than 1% of the faunal remains fall into this category.

Radiocarbon dating of six cut-marked bones revealed these are between 12,000 and 24,000 years old, which is consistent with previous estimates of Bluefish Caves remains. The oldest bone is a horse mandible found buried in basal loess, at a depth of 142 cm.

“It is highly unlikely that the cut marks observed on the Bluefish Caves faunal material were generated by nonhuman agents or natural processes,” the researchers reported.

“In conclusion, while the Yana River sites indicate a human presence in Western Beringia ca. 32,000 cal BP (calibrated years Before Present), the Bluefish Caves site proves that people were in Eastern Beringia during the LGM, by at least 24,000 cal BP, thus providing long-awaited archaeological support for the “Beringian standstill hypothesis”. According to this hypothesis, a human population genetically isolated existed in Beringia from about 15,000 to 23,000 cal BP, or possibly earlier, before dispersing into North and eventually South America after the LGM,” they added.

“By around 15–14,000 cal BP an ice-free corridor formed between the Laurentide and Cordilleran ice sheets potentially allowing humans to disperse from Beringia to continental North America; arguably, this corridor wouldn’t have been biologically viable for human migration before ca. 13–12,500 cal BP, however. It is now more widely recognized that the first inhabitants of Beringia probably dispersed along a Pacific coastal route, possibly as early as ca. 16,000 cal BP, and settled south of the ice sheets before the ice-free corridor became a viable route.”

Judging from the evidence, it seems likely that the Bluefish Caves represent the oldest known archaeological site in North America, which would support the standstill hypothesis. The findings don’t contradict previous migration theories into North America. The bulk of humans going south into continental North America, then further south into Central and South America, likely started 14,000 years ago. Meanwhile, dispersed and small populations sporadically might have occupied Eastern Beringia.