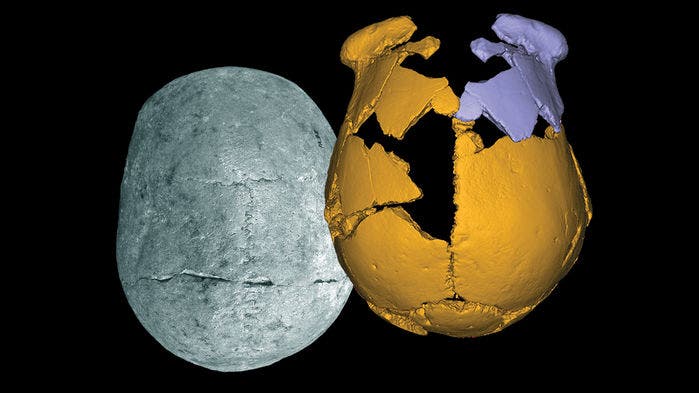 Chinese researchers uncovered two partial skulls which might have belonged to a new species of archaic human. In this image, colored in yellow are the fragments found by the researchers which were put together with their mirror-image pieces (purple). Credit: AAAS

Two partial skulls recovered from eastern China have perplexed scientists with their intriguing mix of both Neanderthal and Homo sapiens features. These people weren’t modern human nor Neanderthals but some other species. So far, the likeliest candidate seems to be the Denisovans, an extinct group of ice age people first discovered in 2010 — but until a DNA analysis of the fragments is performed we can’t know for sure. Some speculate we might have come across a new species of archaic humans from the genus Homo.

The skulls were unearthed after one fateful day in 2007 archaeologist Zhan-Yang Li spotted quartz tools eroding out of the sediments at a site near the town of Lingjing, in China’s Henan province. Li, who works at the Institute of Vertebrate Paleontology and Paleoanthropology (IVPP) in Beijing, ordered the extension of the field study for a couple more days in light of these findings. He was inspired because the digs eventually surfaced a yellow piece of skull cap protruding from the muddy floor.

After digs made during six seasons, the archaeologists retrieved 45 fossil fragments which came together to form two skulls. The fossils were found in the same sediment layer as the quartz tools and have been dated to 105,000 to 125,000 years ago.

The Pleistocene-era skulls lack jaws and face bones but what remains clearly shows the individuals weren’t human. The brow ridges and skull mass resembled early modern humans of the Old World but the ear canals and large, back section of the skull clearly resemble those of Neanderthals. One of the skulls has a brain volume of 1800 cubic centimeters, which is higher than average for both modern humans and Neanderthals, as reported in the journal Science.

Not Neanderthal nor Homo sapiens, that’s for sure. Nor did the skulls belong to some other archaic humans as Homo erectus or Homo heidelbergensis since the skulls are too light and the brains far too big.

Xiu-Jie Wu, a paleoanthropologist at IVPP, thinks the skulls belonged to a new archaic human that survived in East Asia up until 100,000 years ago. He cites compelling evidence such as another early human skull retrieved from China’s Nihewan Ba­sin 850 kilometers to the north of Lingjing which shares similar features like the broad cranial base and low, flat plateau along the top of the skull.

A mosaic of features

Based on similarities with other Asian fossils dated 600,000 to 100,000 years ago, Wu and colleagues suggest the new crania belonged to members of a regional population from eastern Asia who passed local traits down from generation to generation. In other words, a distinct population of archaic humans who passed their genes in a form of regional continuity. The population must not have been isolated, though, judging from the resemblances to both Neanderthals and modern humans which suggest racial mixing, at least in low levels.

Jean-Jacques Hublin of the Max Planck Institute for Evolutionary Anthropology, however, thinks we’re dealing with Denisovans. It is at Hublin’s lab that one day in 2010 researchers identified a new Homo species, the Denisovans in question, after sequencing DNA From a 40,000-year-old adult tooth and an exquisitely preserved fossilized pinkie bone that had belonged to a young girl who was between five and seven years old when she died. When Homo sapiens left Africa, they were not alone — they were joined by both Neanderthals and these elusive Denisovans which traveled deep into Asia. 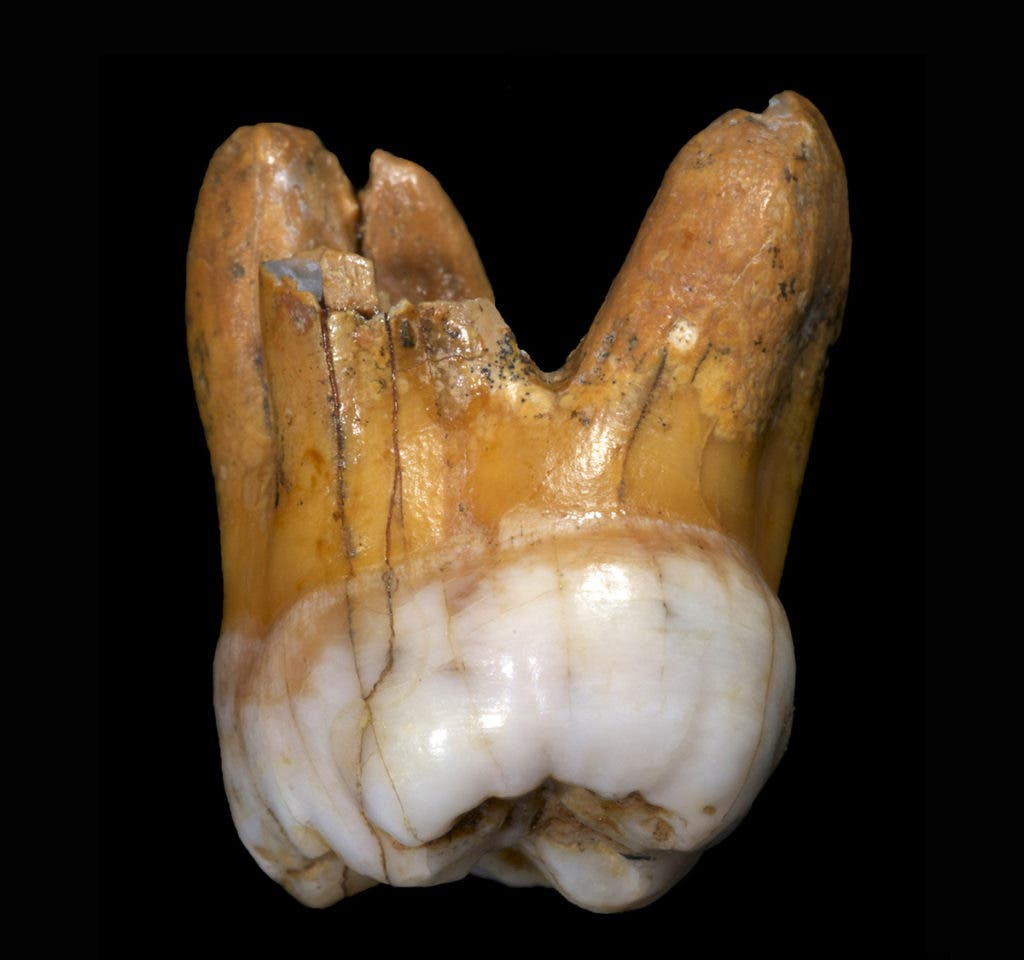 A molar that belonged to an ancient Denisovan. Credit: Max Planck Institute for Evolutionary Anthropology.

Studies show the girl was closely related to Neanderthals, yet distinct enough to merit classification as a new species of archaic humans. But other than these two lone samples, a tooth and a pinkie bone retrieved from the Denisova cave in southern Siberia, we don’t have any other fossils to pin to Denisovans. These two crania could have belonged to some Denisovans, though, or so Hublin believes.

“This is exactly what the DNA tells us when one tries to make sense of the Denisova discoveries,” he said. “These Chinese fossils are in the right place at the right time, with the right features.”

“This would be the combination that one would expect based on the ancient DNA analysis of Denisovans, who were closely related to Neanderthals,” Neanderthal expert Katerina Harvati from the University of Tübingen in German told The Washington Post.

The only way to get to the bottom of things is to have DNA sequenced from these skull fragments. It might prove tricky, but if scientists manage to isolate enough workable samples, a monumental discovery might be in the working. Even if the skulls turn out not to belong to a new species, if these used to be Denisovans than we’ll at least learn much more about our cousins with which we shared this planet not that long ago. This is some very exciting work.

“The biological nature of the immediate predecessors of modern humans in eastern Eurasia has been poorly known from the human fossil record,” said Erik Trinkaus, a corresponding author for the study and professor of anthropology at Washington University in St. Louis. “The discovery of these skulls of late archaic humans, from Xuchang, substantially increases our knowledge of these people.”

More importantly, he noted: “The features of these fossils reinforce a pattern of regional population continuity in eastern Eurasia, combined with shared long-terms trends in human biology and populational connections across Eurasia. They reinforce the unity and dynamic nature of human evolution leading up to modern human emergence.”

3 thoughts on “Peculiar ancient skulls have both human and Neanderthal features. Could belong to a new hominid species”