Researchers have found that just like babies, bonobos exhibit a type of communication in which they use the same sound with different intonations to say different things. They use these high pitch “peeps” to express their emotions. 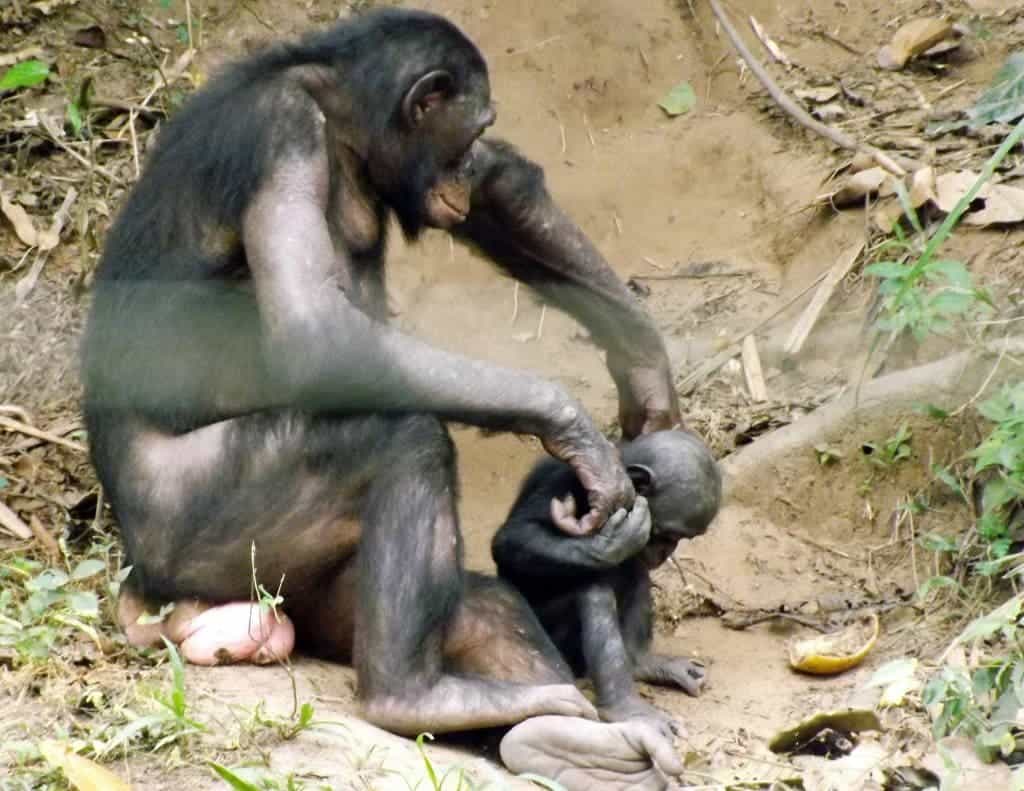 Bonobo (Pan paniscus) mother and infant at Lola ya Bonobo

Formerly called pigmy chimps, bonobos are endangered great apes found only south of the Congo River and north of the Kasai River, in the humid forests of Congo. Like all great apes, they exhibit some similarities to humans; they can pass the mirror recognition test, they can communicate through vocalizations and they can also communicate using lexigrams (geometric symbols). Now, a new study has found that they use the same call to mean different things in different situations, and the other bonobos have to take the context into account when determining the meaning – something only observed in humans, especially babies.

Lead author Zanna Clay was studying these endangered apes in their native Congo when she started noticing their peeps – she and her colleagues quickly understood that the same sounds were being used in different circumstances. Dr. Clay, a biologist at the Université de Neuchâtel, was also surprised by the frequency of these calls.

“Bonobos peep in just about every context you can imagine,” Clay says in an interview. “They peep when they’re traveling, feeding, grooming, resting, nest building, playing, aggression, alarm – you name it. This is striking because bonobos also produce many other calls which are much more fixed in their apparent use and function.”

Along with colleagues from the University of Birmingham, they started to look at these calls in more detail. Their complexity quickly became apparent.

“It became apparent that because we couldn’t always differentiate between peeps, we needed to understand the context to get to the root of their communication,” she said.

“In humans, protophones are the building blocks of speech, in that they vary in function across different emotional states and contexts,” Clay says. “This contrasts with fixed calls in human babies, such as laughter and crying, which resemble typical primate calls. The peep seems to be a rather exceptional call in the bonobo repertoire in its degree of flexible usage.”

This represents an important evolutionary moment of transition – bonobos are shifting to flexible calls and more advanced speech. Given enough time, their speech might develop into something similar to human communication.

“Although humans are unique in terms of our amazing speech and language capacities,” Clay says, “the foundations underlying these abilities appear to be already present in the last common ancestor we share with great apes. The findings suggest the existence of an intermediate stage between fixed vocal signalling seen in most primate calls and fully fledged flexible signalling in humans.”

According to previous research, humans developed this ability some 6-10 million years ago. It appears that features like this one are deeply enrooted in the primate lineage.