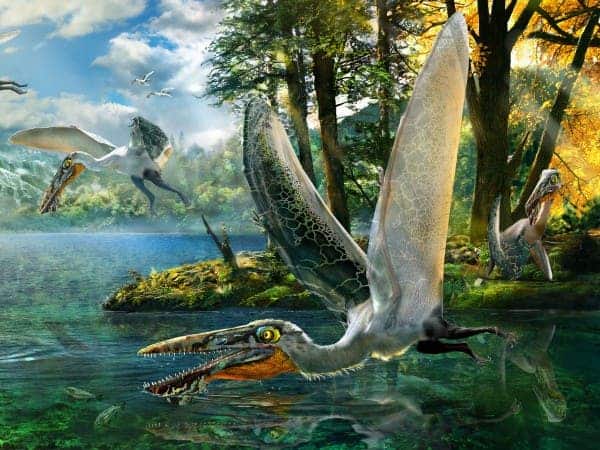 Paleontologists have discovered a new pterosaur species in 120-million-year-old rocks at two sites in northeastern China.  The flying reptile was dubbed Ikrandraco avatar, where draco is Latin for “dragon,” and Ikran are the pterosaurlike flying beasts depicted in the 2009 blockbuster Avatar.

The ancient reptile was described in paper published in the journal Scientific Reports as having a deep lower jaw with a a thin, crescent-shaped keel.  At the end of this bony keel, the researchers note a peculiar hook-shaped projection – an unique feature never before seen in any other pterosaur or vertebrate for that matter – that might have served as an anchor for soft tissue. These suggest that the Ikrandraco may have sported a pelicanlike throat pouch which the flying reptile would have used to carry fish gleaned from lakes or other waters.

I’m note sure how much of the artist representation from above is speculative art or factual representation. If the latter’s the case, then damn this Ikrandraco was one interesting beast!