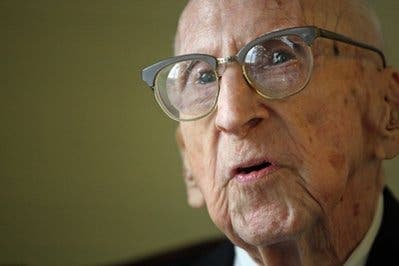 A healthy life style, plenty of exercise and good genes might be your best bet, if you’re looking for a long life, but an eight decade study in the making found one common denominator – the answer to longevity is consciousness.

In 1921, in a quest to understand what really sets apart people who happen to reach 80, even 90 years old, Dr. Terman embarked patiently in a life long study. He chose 1,528 bright San Francisco 11-year-olds, and followed each individual with respect to their personality, parents marriages, play habits and so on, with an interview being conducted every 5 or 10 years. Dr. Terman eventually died in 1956, but his colleagues continued the regular interviews with the original subjects, asking the same questions Dr. Terman had asked.

In 1990, Dr. Friedman and Leslie Martin, still a graduate student at the time, wanted to a dwell into a similar study, only to rejoicefuly find that a similar attempt had been made many decades before. So, the two followed in Dr. Terman’s footsteps and continued his legacy. Dr. Friedman and Dr. Martin meticulously went through Dr. Terman’s records, dredged up death certificates and asked Dr. Terman’s questions of study participants’ survivors, while at the same they also conducted a group analysis of other similar studies, and collaborated with experts from many fields.

Key traits for a long life: prudence and persistence

As part of the eight decade long study, Friedman and Martin found that the key features of a long life are prudence and persistence.

“The findings clearly revealed that the best childhood personality predictor of longevity was conscientiousness,” they write, “the qualities of a prudent, persistent, well-organized person, like a scientist-professor — somewhat obsessive and not at all carefree.”

The continuation of the study wasn’t without predicaments either. One of the major issues they faced was how to pose the same questions Dr. Terman put more than 80 years ago, and still keep the study relevant and consistent. For example one of Dr. Terman’s original questions he asked parents sounded like “How likely are you to upbraid a workman?”. Not quite familiar in contemporary terms, but by employing a complicated linguistic measurement called factor analysis, Dr. Martin said, the researchers were able to come up with the 21st-century equivalent: “How do you deal with co-workers?”

According to Dr. Friedman, “genes constitute about one-third of the factors leading to long life.” This means if your grand daddy lived to be 90, that doesn’t mean you’ll be too. What does consciousness has to do with longevity, then?

Researchers have a couples of explanations for this. The most obvious explanation is that conscientious people are more likely to live healthy lifestyles, not smoke or drink to excess, wear seat belts, follow doctors’ orders and take medication as prescribed – conscious people are very safe. Secondly, conscientious people tend to find themselves not only in healthier situations but also in healthier relationships: happier marriages, better friendships, healthier work situations. A happier man is more likely to live longer – this doesn’t necessarily mean that conscious people are happier, just that they’re more like to be happy.

The most fascinating and important explanation that links consciousness with longevity is that some people are simply biologically predisposed to be not only more conscientiousness but also healthier, researchers found. ”

“We thought it must be something biological,” Dr. Friedman said. “We ruled out every other factor.”[…] “Not only do they tend to avoid violent deaths and illnesses linked to smoking and drinking,” they write, “but conscientious individuals are less prone to a whole host of diseases, not just those caused by dangerous habits.”

Stress is good for longevity

If you’ve been walking all your life on sunshine, don’t expect a few more years scrapped from the calendar.

“If you’re cheerful, very optimistic, especially in the face of illness and recovery, if you don’t consider the possibility that you might have setbacks, then those setbacks are harder to deal with,” Dr. Martin said. “If you’re one of those people who thinks everything’s fine — ‘no need to back up those computer files’ — the stress of failure, because you haven’t been more careful, is harmful. You almost set yourself up for more problems.”

A stress free lifestyle isn’t too helpful either, instead challenges that push you and make you more conscious of yourself and your surroundings have a much greater effect.

“There’s a misconception about stress,” Dr. Friedman said. “People think everyone should take it easy.” Rather, he said, “a hard job that is also stressful can be associated with longevity. Challenges, even if stressful, are also a link.” In the end, he said, “if people were involved, working hard, succeeded, were responsible —no matter what field they were in — they were more likely to live longer.”

Many people, of course, have to stay in a job they don’t like or don’t do well in. That’s bad stress, and they found those people were more likely to die young.

Other lifespan-increasing factors were having a very close social network, being extroverted, being aware of satisfaction with life as a whole, and being religious or spiritual. When it comes to the subject of married, researchers found that it was not influential factor in living longer, although having a healthy and loving marriage did play a big part – for men only that is. This might light some sparks, I’m sure.

If you’d like to find out more on the subject, the whole study has been carefully written for the general public in the form of a recently released book, titled “The Longevity Project: Surprising Discoveries for Health and Long Life from the Landmark Eight-Decade Study.”

4 thoughts on “The secret to a long life: consciousness”