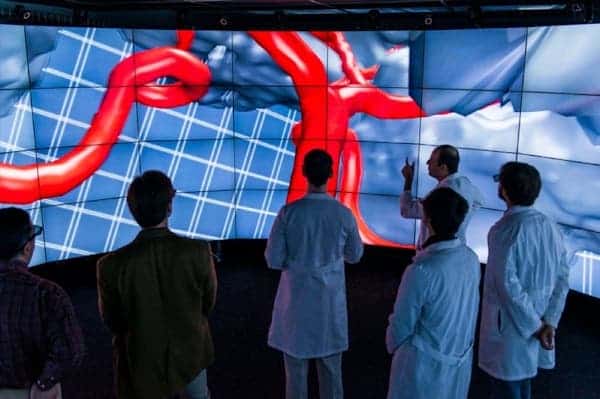 Computer scientists at University of Illinois at Chicago have created what can only be described as a real-life Star Trek holodeck. Now, it’s not nearly as impressive as its SciFi counterpart, after all futurist Tim Huckaby predicted it will take some ten years before a full blown version might be created, still virtual reality is about to step in a whole new ground, thanks to innovations just like this.

Called CAVE2, it features screens eight feet high wrapped in 320 degrees – once you step inside, you’re in a whole new world be it aboard the Starship enterprise, on a voyage to Mars, or take you for a stroll between the blood vessels in the brain. The latter is what makes it a truly useful addition to science, not just a geeky high-tech cave.

The thing is, technology and science is so advanced nowadays that data is available on a myriad of aspects. However, it’s still up to scientists, who are just humans after all, to put all the pieces together. In a virtual environment where you can explore and interactively see what happens, like folding a protein or adding drugs to see how they react and such, this whole process runs a whole lot smoother. Hopefully, we’ll see more CAVE2 like labs in the future.

The video below explains how CAVE2 works and presents the concept in greater detail. Enjoy!