With Virtual Reality headsets coming out right around the corner, how can the gap with experience become more immersive? A couple of technologies on the horizon and currently under development may be the key. 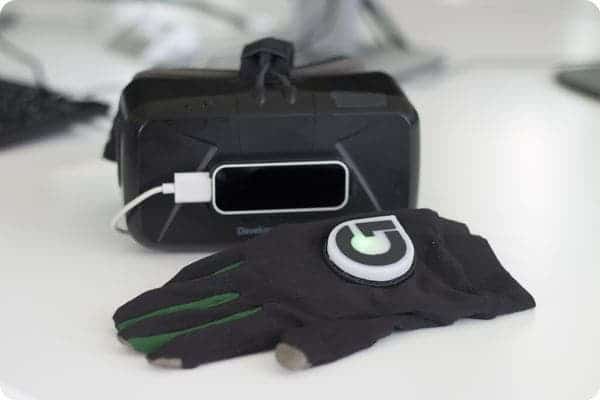 Haptic feedback allows you physically feel objects in a virtual world. Gloveone is one of the most exciting haptic feedback products – it lets you feel the virtual world at the tip of your fingers. The gloves are capable of reproducing the feeling of objects in your hand, and according to its founders you can even feel the weight of things in your hand. Image: NeuroDigital

Vestibular stimulation, a technique that involves applying a small electric charge behind the ear, can induce a distinct sensation of motion. While not extremely precise in its current form, with time, it’ll be possible to accurately and perfectly stimulate sensations like falling, turning, leaning, and other quirks from having your balance altered.

More subtly, it can be used in conjunction with freedom of movement to trick a user into not only moving around an enclosed space in a circle, but to hide the fact that they are going in circles. This can open up a huge world of possibility for VR headsets that incorporate movement in the physical world without needing to secure hundreds of square feet of space to use them.

Additionally, force feedback is growing more sophisticated than rumble packs in video game controllers. Haptic feedback can help simulate the sensation of touch for wearers, such as with the gloveone for helping rehabilitate injured or bedridden patients.

Additionally, haptic vibrations can stimulate taste buds to create taste for the user and immerse them in an experience that couldn’t be “faked” until now. Back in 2009, electric signals were passed through the tongue for blind users and they were able to ‘see’ again.

While these developments are exciting, the world of virtual possibility is limitless. More innovative and creative technologies will be created once the headsets reach public hands, rather than being restricted to research and small-use cases.

Widespread adoption will only create more demand for a higher level of immersion that engages wearers in way that blurs the line between reality and the virtual.

Especially once holodecks are a real thing. Scientists have already created a way to make holograms feel like they’re actually there, without affecting the display or changing the image at all. Combine that with the other technologies that are presented here, a little bit of laser-tag excitement, and you have a virtual reality theme park.