According to flight tests ran between 2013 and 2014 by NASA scientists, biofuels can reduce jet engine particle emissions by 50 to 70 percent. 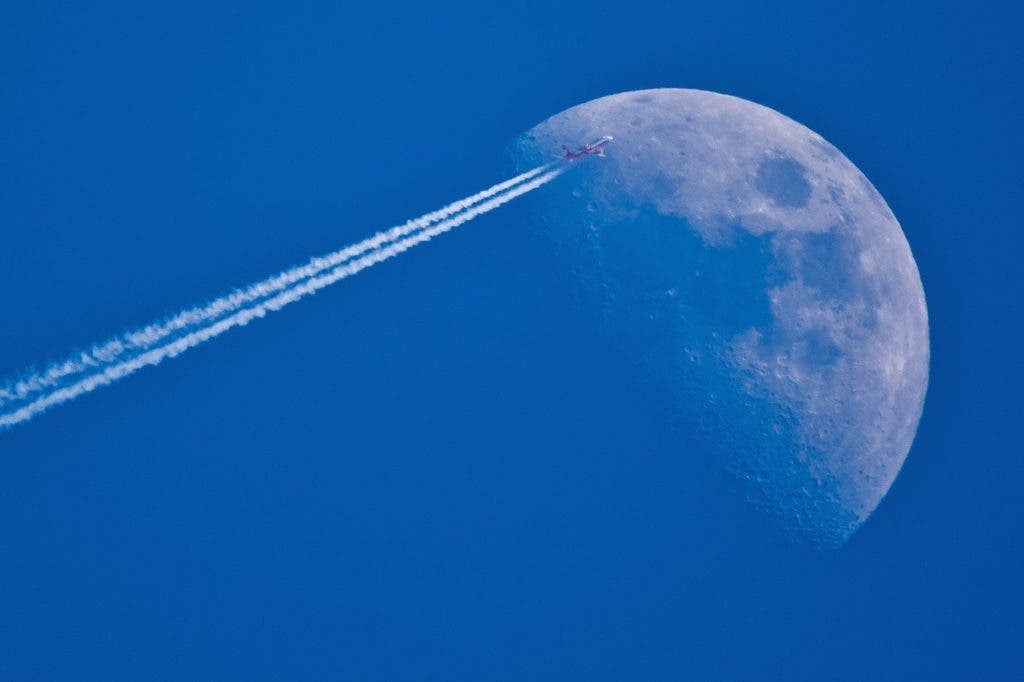 The researchers collected data on engine performance, emissions, and contrails generated at altitudes flown by commercial airliners. Contrails or ‘condensation trails’ are the white, line-shaped clouds that aircraft produce when the hot engine exhaust meets the cold air several miles above the Earth’s surface. It’s primarily made of water ice crystals, although many conspiracy theorists refer to contrails as ‘chemtrails’ and claim these containing anything from fluoride to mind-control chemicals intentionally dumped by the government.

Anyway, back to real science.

According to 2011 paper, contrails cause cirrus clouds to form which can have a larger impact on Earth’s atmosphere than all the aviation-related CO2 emissions since the Wright brothers made their first flight. While the CO2 emissions from airplanes account for around three percent of the annual CO2 emissions from all fossil fuels and change the radiation by 28 milliwatts per square meter, the aviation contrails are responsible for a change of around 31 milliwatts per square meter.

The tests run by NASA were performed on a DC-8 workhorse operating as high as 40,000 feet above the surface (very challenging) on a 50-50 blend of renewable biofuel and kerosene. The alternative fuel is made of hydro-processed esters and fatty acids obtained from the camelina plant oil.

“Measurements in the wake of aircraft require highly experienced crew members and proven measuring equipment, which DLR has built up over many years,” said report co-author Hans Schlager of the DLR Institute of Atmospheric Physics. “Since 2000, the DLR Falcon has been used in numerous measurement campaigns to investigate the emissions and contrails of commercial airliners.”

Incidentally, my Msc. thesis was about camelina oil-derived biofuels and although I focused on a life cycle analysis in non-aviation transportation, I found camelina to be promising as a liquid fuel too. The results weren’t peer-reviewed so I won’t say more about it other that the plant’s seeds have a very high fatty acid content and camelina can grow in arid locations where food crops aren’t suitable. Camelina needs little to any fertilizer input. It’s also a great nitrogen fixer which means you can use camelina in rotation with grain crops and, theoretically at least, you can improve the soil while making a profit.

Compared to straight Jet A fuel, the 50-50 blend achieved remarkable reductions in exhaust emissions, as much as 50 to 70 percent. The findings were reported in the journal Nature.

“As a result, the observed particle reductions we’ve measured during ACCESS should directly translate into reduced ice crystal concentrations in contrails, which in turn should help minimize their impact on Earth’s environment,” Andersson said.

This NASA study is just the most recent to confirm camelina-derived biofuels can have a huge environmental impact on aviation. One 2009 study found camelina jet fuel could cut carbon emissions by 84 percent, for instance.

NASA plans on continuing these sort of studies to assess whether or not it’s feasible to replace current fuels with biofuels. They even hope to use only biofuels for NASA’s upcoming supersonic X-plane.

3 thoughts on “Biofuels reduce jet engine emissions by as much as 70%, NASA says”