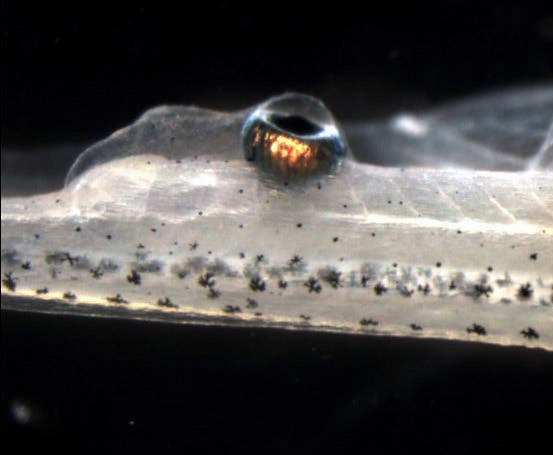 An eye growing on the tail of a tadpole.

Most animals have eyes in the vicinity of their brains, typically inside the head, since these are very sensible organs that require a very sophisticated neural link. Recently, biologists at Tufts University have shown that they could implant working eyes in other locations as well, after they granted blind tadpoles vision after they implanted eyes in their tails. The findings might offer further insight into artificial visions and regenerative medicine.

The scientists experimented with 134 tadpoles of the African clawed frog Xenopus laevis, a popular lab pet for researchers worldwide. These had their eyes surgically removed, after which the scientists painstakingly implanted eyes in their torsos and tails.

An experimental set-up was devised with quadrants of water illuminated by either red or blue LED light. The arena, half illuminated in red, half illuminated in blue, would regularly switch between colors via software. The trick lied in the fact that whenever tadpoles when enter the red district, they would receive a mild electrical shock. A motion-tracking camera kept tabs on where the tadpoles were at all times.

Remarkably, it was observed that six of the tadpoles always kept away from the red half of the arena, hinting that they could see with the eyes implanted in their tails. These eyes came from other genetically engineered tadpoles that were instructed to grow a red florescent protein. This allowed the researchers to see whether the eyes sent red nerves outward in the body. Half the 134 recipient tadpoles had no such nerves grow, while about a quarter had nerves projecting toward the gut and the other quarter had nerves extending toward their spine. All of the six tadpoles that showed signs of vision had nerves plugged into their spine, meaning their new eyes were now linked to their nervous system.

“One of the things that this study showed us is that connecting a sense organ as complex as the eye to the spinal cord is sufficient to confer vision,” Dr. Michael Levin said. “So you don’t have to plug in to the actual brain.”

Does this mean that the tadpoles can see just as well as they used to with their original eyes? In reply to this vexing questions, the scientists’ answer is straightforward – they don’t know. “We have no idea what a tadpole is experiencing. This is a philosophical question that is not immediately tractable,” the researchers write in their paper published in the Journal of Experimental Biology.

It’s well worth noting that applications for this kind of research aren’t limited to regenerative medicine only, augmented technology for instance would have a lot to benefit.

“You may want to increase your sensory capacity with sensors that normal people usually don’t have,” he said. “This opens the possibility for attaching all sorts of peripherals to your body.”

Robot designers could also learn a thing or two from the findings, in terms of adaptive flexibility.

“You can imagine that information that comes from any sensory structure – any part of the body – is tagged in some way that uses a unique identifier,” said Dr. Douglas Blackiston, a post-doctoral associate. “So, the source of that information is not nearly as important as what the brain is sensing.”