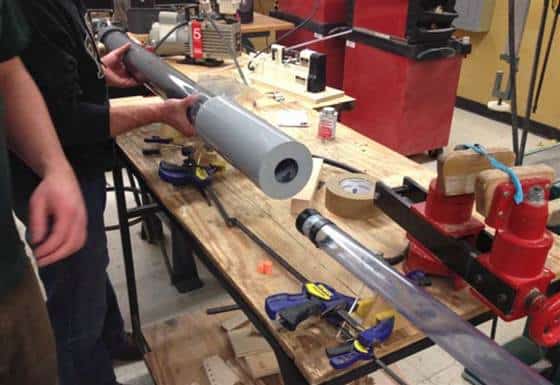 If there’s something ever wrong with ping-pong guns is that they fire too slow. So, Mark French, a mechanical engineer at Purdue University in Indiana, along with a couple of his graduate students took it upon themselves to finally design a gun that can fires ping-pong balls at supersonic speeds. Of course, this makes for a very interesting and compelling scientific experiment, since it teaches so much about fluid dynamics, while keeping the student engaged with a favorite subject – guns. You all know it’s true. Sigh.

“You can shoot Ping-Pong balls through pop cans and it is great, it is so captivating, it is so compelling that you can get kids’ attention and once you’ve got their attention, you can teach them something,” Mark French, the Purdue University assistant professor who built the gun, told NBC News

The gun basically consists of a slightly-larger-than Ping-Pong-ball-diameter tube, sealed with duct tape at the ends. The air is then sucked to create vacuum, and once one of the seal is broken air rushes in and swirls the projectile (i.e. ping-pong ball) at a very high velocity.

With this simple set-up you can catapult your projectile at a great speed, however the Purdue University researcher wanted even more, so he applied a working principle typically used by aeronautic engineers. Thus, he made a nozzle design with a pinch in the middle, typically called de Laval nozzle, named after the Swedish engineer who invented it in the 19th century. As air enters the so-called convergent-divergent or de Laval nozzle, it accelerates as it is compressed, reaching supersonic speeds as the nozzle expands.

This supersonic flow then enters the gun barrel where it accelerates a ping pong ball to supersonic speeds  of over 400 metres per second or just about Mach 1.2.  That’s faster than a F-16 flying at top speed at sea level. Crazy stuff to achieve with only a tube, a ping-pong ball, some duct-tape and tons of witty design.