There are numerous challenges that come with outer Earth colonization of distant planets like Mars, or our neighboring moon, and one of the major issues scientists have addressed is reproduction. Part of a  recently published study, scientists have tracked the development of worm cultures in space in an experiment designed to study how micro-gravity and radiation has affected them.

Back in 2006, researchers blasted off to the ISS 4,000 specimens of Caenorhabditis elegans (C elegans), a soil-living worm used extensively in various researchers through out the years. Until recently, 12 generation of the nematode have been successfully bred, passing from egg to adulthood, which reproduced very much in the same way like on Earth. 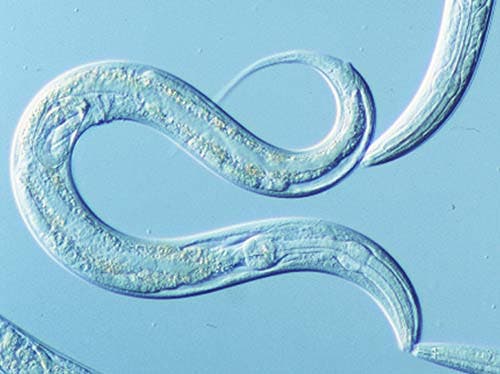 Remarkably enough, C elegans is very much similar to humans. Alright, let me explain. It has 20,000 protein-coding genes, more or less the same amount as humans, which also roughly possess the same functions as ours. Two thousand of these genes have a role in promoting muscle function and 50 to 60 per cent of these have very obvious human counterparts. In 1998, the creature commonly found in the soil of your backyard was the first multi-celullar being to have its genome completely sequenced.

“We have been able to show that worms can grow and reproduce in space for long enough to reach another planet, and that we can remotely monitor their health,” study lead author Nathaniel Szewczyk, of the University of Nottingham in the United Kingdom, said in a statement.

“As a result, C. elegans is a cost-effective option for discovering and studying the biological effects of deep space missions,” Szewczyk added. “Ultimately, we are now in a position to be able to remotely grow and study an animal on another planet.”

The worms were bred using a compact automated culturing system that can be monitored remotely, which transferred a subset of worms to fresh food every month, filming the worms’ progress as they went. Since the results were monitored in real time directly from Earth, it spared scientists the nerves which would’ve been tensed to oblivion resulting from data solely dependent on a sample re-entry.

The researchers conclude that C. elegans shows that man could survive as an interplaneteray species, and provides invaluable data for further research regarding radiation exposure and muscle atrofiation, the most pressing issues at hand as far as manned space exploration is concerned.

“While it may seem surprising, many of the biological changes that happen during spaceflight affect astronauts and worms, and in the same way,” Szewczyk said.

C. elegans has gone farther away than any worm on Earth, and its journey is far from over. Considering the success of this study, the researchers are considering sending a batch as far as on to the Mars surface. This would provide genuine readings of just how dangerous the high radiation levels found in deep space, and on the Red Planet’s surface, are to animal life. We’re still waiting for some results from the cephalopods  study on the ISS, where baby squids were brought into space for experiments.

“Worms allow us to detect changes in growth, development, reproduction and behavior in response to environmental conditions such as toxins or in response to deep space missions,” Szewczyk said. “Given the high failure rate of Mars missions, use of worms allows us to safely and relatively cheaply test spacecraft systems prior to manned missions.”

The researchers’ results were published in a recent edition of the Royal Society journal.

One thought on “Worms show that Mars colonization is possible”