Researchers at Tufts University School of Medicine came across a particular strain of bacteriophage – a virus that infects and replicates within bacteria – that had stolen the functional immune system of the cholera bacteria.  The virus used the bacteria’s immune system against it to replicate and eventually kill the bacteria. The findings hint to the prospect of developing new phage therapies against bacterial diseases like cholera. 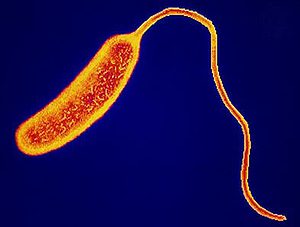 Until now, scientists have never witnessed this kind of behavior before which has prompted them to believe that phages – typically regarded as primitive particles of DNA or RNA – lack the necessary sophisticated mechanisms to develop an adaptive immune system, which is a system that can respond rapidly to a nearly infinite variety of new challenges.

Andrew Camilli, Ph.D., of Tufts University School of Medicine and also the lead author of the present study, came by the discovery by accident while analyzing DNA sequences of phages collected from stool samples of diseased cholera patients in Bangladesh.  It was then that he identified genes that expressed a functional immune system previously found only in some bacteria.

“Virtually all bacteria can be infected by phages. About half of the world’s known bacteria have this adaptive immune system, called CRISPR/Cas, which is used primarily to provide immunity against phages. Although this immune system was commandeered by the phage, its origin remains unknown because the cholera bacterium itself currently lacks this system. What is really remarkable is that the immune system is being used by the phage to adapt to and overcome the defense systems of the cholera bacteria. Finding a CRISPR/Cas system in a phage shows that there is gene flow between the phage and bacteria even for something as large and complex as the genes for an adaptive immune system,” said Seed.

“The study lends credence to the controversial idea that viruses are living creatures, and bolsters the possibility of using phage therapy to treat bacterial infections, especially those that are resistant to antibiotic treatment,” said Camilli, professor of Molecular Biology & Microbiology at Tufts University School of Medicine and member of the Molecular Microbiology program faculty at the Sackler School of Graduate Biomedical Sciences at Tufts University.

Phages have been found to be highly prevalent in stool samples infected with bacteria, and since a strain capable of hosting an adaptive immune system was encountered, it seems highly likely that it came naturally. The team is currently working on a study to understand precisely how the phage immune system disables the defense systems of the cholera bacteria, such that effective phage therapies might be developed.