Medtronics is a medical tech behemoth worth $15 billion. Among other cutting edge medical tech and R&D SciFi prototypes, the company is responsible for manufacturing a wide range of pacemakers, anti-seizure gadgets along with a number of surgery machinery. One of their most successful products in the last decade is a spinal implant that alleviates people suffering of serious back pain, at a hefty cost it seems – cancer. 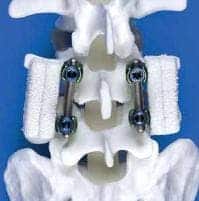 Amplify, a product used in spinal surgery, that act as carriers for bone morphogenetic protein-2 as well as a scaffold for new bone formation.

The tiny device is implanted via surgery between vertebrates to correct irregularities in the spine including scoliosis, kyphosis, disc herniation or vertebral fracture. The implant held much promise, since before it came into practice a similar procedure required  an extra surgery to get replacement bone from the patient’s hip or rely on a donor bone for it to be effective. Instead, the products Infuse (in production since 2002) and Amplify (unapproved), get the same results or better by use of a bone growth stimulating biological agent known as bone morphogenetic protein-2, or BMP-2.

In 2009, Medtronics paid millions of dollars for an investigation by surgeons whose purpose was to assess whether the product was safe or not. No safety hazards were found as a result of this extensive medical trial. An independent research however, sparked by various frightening stories in journals, showed that after two or three years from the implant with the genetically engineered protein, the number of patients diagnosed with cancer dramatically increased. The original 2009 paper authors, which were funded with millions by Medtronics, defended themselves by stating that at the time they published the report there were no signs that would allow them to correlate the implants with cancer.

Revenue from Infuse has been about $700 million annually since coming on the market in 2002. Amplify has yet to be approved, but Medtronics is constantly appealing the decision. Clearly there’s a serious conflict of interest at hand.

“There is no question that BMP has biological effects that we don’t fully understand,” said Raj Rao, a professor of orthopedic surgery at the Medical College of Wisconsin and a member of the 2010 FDA advisory panel on Amplify.

Much of these finds have been exposed by the extraordinary display of investigative journalism of the Milwaukee Journal-Sentinel, which published an exhaustive piece on the controversial subject, after digging in through more 1,000 pages of FDA document and recruiting qualified physicians to aid.