Sexting has been taking a lot of flak recently, the debate focusing mostly on its negative aspects, such as the vulnerability of young people sending sexually explicit communications or how peer pressure can determine them to engage in the activity. A recent study, presented at the American Psychological Association’s 2015 convention reveals how widespread sexting actually is amongst adults, and looks at the benefits it brings to a relationship.

Research done at Drexel University in the US found that sexting is much more prevalent in society than many might think. Their survey of 870 volunteers, aged between 18 and 82 years old, found that almost 9 out of 10 participants (88 percent of them, to be exact) have sent sexually suggestive or explicit content via text message at one point in their lives, and 82 percent of those surveyed had sexted in the past year. 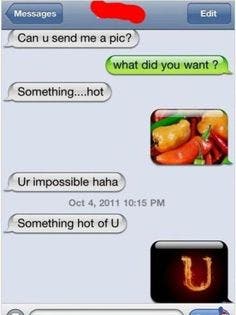 Hopefully with more success that this.
Image via Pinterest

The most exciting finds of the study were correlations that formed between sexting and the levels of satisfaction in sexual relationships, with more pronounced levels of sexting being associated with greater sexual satisfaction for respondents, especially in the context of a stable relationship.

“This research indicates that sexting is a prevalent behaviour that adults engage in for a variety of reasons. These findings show a robust relationship between sexting and sexual and relationship satisfaction.”

People who sext more reported seeing the activity as fun and carefree but are also more likely to view the behavior as something that’s expected in their relationships.

“Given the possible implications, both positive and negative, for sexual health, it is important to continue investigating the role sexting plays in current romantic and sexual relationships,” said Emily Stasko, co-author of the research, in a press release.

The sample size used in the study is admittedly small, so the results should be looked at with a pinch of salt, as we can’t simply conclude that the numbers apply to the rest of society equally. But the researchers’ work does present some interesting ideas that will no doubt be followed up on in further studies.

It’s also worth highlighting that the study focused on sexts between consenting adults, not unwanted messages or pictures which could be construed as harassment.

“Context mattered and not all sexting is equal,” Stasko told Nadia White at NPR. “Unwanted sexting is bad for relationships, but when it’s wanted, it’s good.”

Now, where did i put my phone?