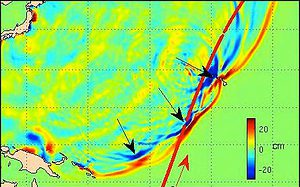 This summer Japan was hit by a tremendous 9.0 Richter scale earthquake, which generated one of the most powerful tsunamis in recorded history. The event killed thousands, left countless others homeless, caused major damage to the Fukushima nuclear power plant , which lead to  radiation leakage and more than $130 bln in damage. Now, new details amassed from correlated weather satellite footage shows that the Japan tsunami was so powerful since it came in a double bundle – the result of two merged tsunamis.

The idea of composite tsunamis, in which two or more wave fronts merge to become one giant tsunami, has been hypothesized before by scientists, however this is the first time it has been observed and confirmed. The Japan tsunami was viewed  by satellites positioned in the moment the giant wave front struck the coastline, which managed to capture data. Thus, the NASA-European Jason-2, NASA-French space Agency satellite altimeter, and the ESA EnviSAT, all satellites equipped with altimeters, observed the tsunamis as they grazed the ocean with centimeter precision.

Remarkably enough, the whole find was filled with a stroke of luck.

“It was a one in 10 million chance that we were able to observe this double wave with satellites,” principal investigator Y Tony Song said.

“Researchers have suspected for decades that such ‘merging tsunamis’ might have been responsible for the 1960 Chilean tsunami that killed about 200 people in Japan and Hawaii, but nobody had definitively observed a merging tsunami until now,” he added.

“It was like looking for a ghost. A NASA-French Space Agency satellite altimeter happened to be in the right place at the right time to capture the double wave and verify its existence.”

The researchers think that ridges and underwater mountains can deflect parts of the initial tsunami wave to form a number of wave fronts. Such a huge wave was able to travel long distances without losing power, according to the researchers, who presented their findings at the American Geophysical Union meeting in San Francisco. The scientists say the data gathered by the satellites may help researchers better predict how future tsunamis will impact coastlines based on the underwater topography in earthquake zones.