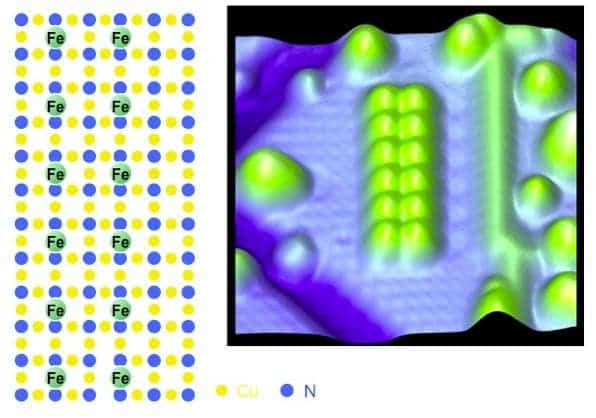 Each little green bump is an atom of ferromagnetic material. All these 12 atoms captioned above form an array capable of storing on bit of information. (c) IBM

Moore’s law states that the level of technology and computing power should double every two years, and so far the postulate hasn’t been wrong in more than 50 years. A group of IBM scientists have now managed to develop a data storage technique which allows for information to be stored with as little as 12 atoms, thousands of times less atoms than it is currently required for a single bite. Gordon Moore, the Intel co-founder, would have been proud.

Storing a single bit of data on a disk drive requires one million atoms of magnetized storage medium, and this is valid only for the most advanced storage devices currently available today. The new research from IBM suggests that, eventually, in the not so distant future storage devices could be developed at 1/83,000th the scale of today’s disk drives.

“Magnetic materials are extremely useful and strategically important to many major economies, but there aren’t that many of them,” said Shan X. Wang, director of the Center for Magnetic Nanotechnology at Stanford University. “To make a brand new material is very intriguing and scientifically very important.”

The current magnetic storage devices, like the hard-drive currently in use by your computer which basically allows for information like the one on this website to be read and stored, are made out of ferromagnetic materials like iron or nickel. When these materials are exposed to a magnetic field, their magnetic poles line up in the same direction. These materials have worked very well until now, as far as conventional hard drives or micro chips are concerned, however when miniaturization is concerned, at a certain scale bits start to interfe with each other. Antiferromagnetism works in the opposite direction, with a highly important distinction – the orbits of unpaired electrons don’t align to the same direction. Thus atoms in manganese oxide, a material that works well for this, atoms align head to foot such that the North magnetic pole of each atom seeks the South magnetic pole of the other.

Using antiferrogmanetism, the team of researchers from IBM’s Almaden Research Center, led by Andreas Heinrich, managed to create a swathe of material with a much denser magnetic pallet than conventional ferromagnetic devices.  The researchers used a scanning tunneling microscope, a device the size of a washing machine, not only to pin point at an atomic scale, but also accurately position individual atoms together, and engineer 12 antiferromagnetically coupled atoms. This is the the smallest number of atoms with which one can create a magnetic bit in which it is possible to store information.

Heading towards a golden computing age 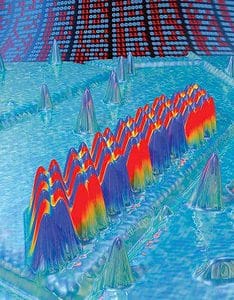 To demonstrate the antiferrogmantic storage effect, the IBM researchers created a computer byte, the equivalent of one character, out of an individually placed array of 96 atoms.   They then used the array to encode the I.B.M. motto “Think” by repeatedly programming the memory block to store representations of its five letters.  Also, as if the sheer scale of this technology wasn’t amazing enough, the IBM researchers observed that, albeit in very small numbers the atoms display some quantum mechanical characteristics – simultaneously existing in both “spin” states, in effect 1 and 0 at the same time. This could have remarkable implications for quantum computing development.

This technology might take many years for regular consumers to experience

Now, although this latest gem from IBM will allow for storage devices to be built at a fraction of the current size and power consumption, don’t expect it to become commercially available to the general public for a pretty long while. The researchers were capable of holding on to a data bit for several hours at a temperature close to absolute zero, along with other conditions remarkably difficult to reach. Also, manufacturing-wise it will take some time probably before an automatic method of arranging, placing and manipulating individual atoms in the proper array.

“It took a room full of equipment worth about 1 million dollars and a whole lot of sweat,” to get the 96-atom configuration to work, Heinrich said. “The atoms are in a very regular pattern because we put them there. “Nobody knows how to make that cost effective in manufacturing…that’s the core issue of nanotechnology.