The fact that the greatest biodiversity of large mammals we know of today is recorded in Africa is a legacy of past human activity, not climate or environmental phenomena, new study reveals. The paper theorizes at how the world today would look if Homo sapiens had never existed.

In a previous analysis, the researchers from Aarhus Univeristy, Denmark, they showed how the mass extinction of large mammals during the last Ice Age and the subsequent millennia, most notably the late-Quaternary megafauna extinction, is largely explainable by the expansion of modern humans across the world.

Building on the findings of their previous research, they imagine what the natural worldwide diversity patterns of mammals would be like in the absence of past and present human impacts. They base this human-free world on estimates of the natural distribution of each species according to its ecology and biogeography by overlapping it with the current natural environment template. The results suggest that in a world without us, most of northern Europe would probably now be home to more common animals such as wolves, Eurasian elk (moose) and bears, but also much larger mammals such as elephants and rhinoceroses. North and South America would also boast much more diverse populations of big mammals.

The natural diversity of large mammals is shown as it would appear without the impact of modern man (Homo sapiens). The figure shows the variation in the number of large mammals (45 kg or larger) that would have occurred per 100 x 100 kilometer grid cell. The numbers on the scale indicate the number of species.
Image via sciencedaily

“Northern Europe is far from the only place in which humans have reduced the diversity of mammals — it’s a worldwide phenomenon. And, in most places, there’s a very large deficit in mammal diversity relative to what it would naturally have been,” says Professor Jens-Christian Svenning, Department of Bioscience, Aarhus University, who is one of the researchers behind the study.

Current mammal diversity maps show that Africa is virtually the only continent where large mammals still boast good numbers and diversity. The world the researchers envisioned on the other hand shows far greater distribution of high large-mammal diversity across most of the world, particularly in North and South America, areas that are currently relatively poor in large mammals. 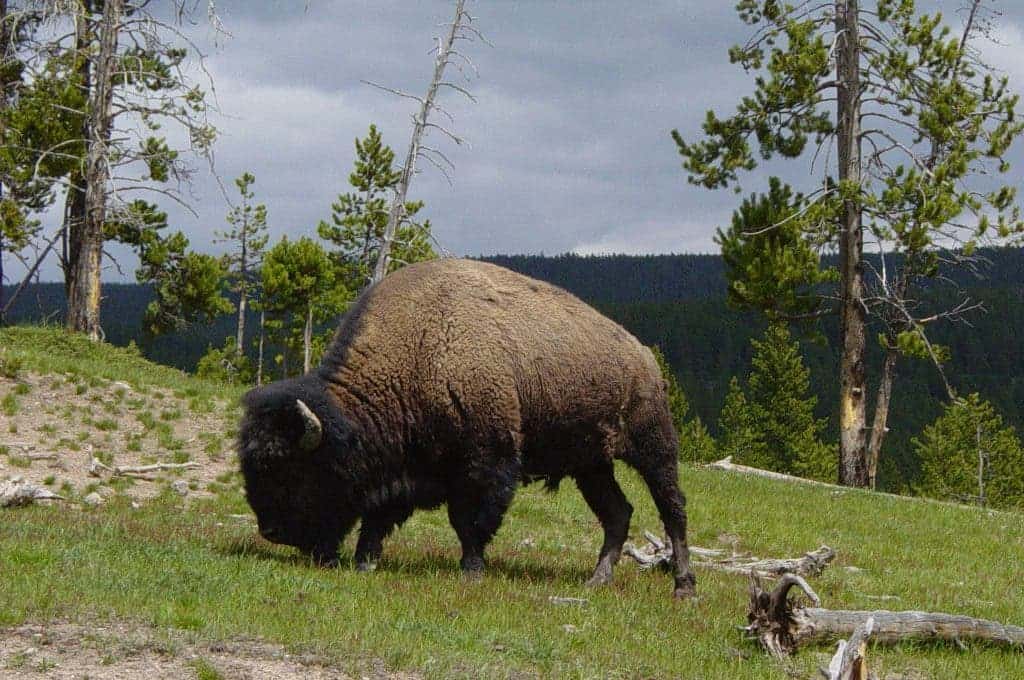 “Most safaris today take place in Africa, but under natural circumstances, as many or even more large animals would no doubt have existed in other places, e.g., notably parts of the New World such as Texas and neighboring areas and the region around northern Argentina-Southern Brazil,” says Postdoctoral Fellow Soren Faurby, Department of Bioscience, Aarhus University, lead author on the study. “The reason that many safaris target Africa is not because the continent is naturally abnormally rich in species of mammals. Instead it reflects that it’s one of the only places where human activities have not yet wiped out most of the large animals.”

Africa then alarmingly becomes not the most-diverse continent due to climate or environment, but the one least un-diversified by humans. The underlying reasons cited by the team includes evolutionary adaptation of large mammals to humans as well as greater pest pressure on human populations in long-inhabited Africa in the past.

The study’s openly accessible data set of natural range maps for all late-Quatenary mammals gives scientists a powerful tool to analyse the natural patterns in the species diversity and composition of mammals worldwide. The data it shows can be used to provide a better understanding of the natural factors that determine the biodiversity in a specific area.

Today, there is a particularly large number of mammal species in mountainous areas. This is often interpreted as a consequence of environmental variation, where different species have evolved in deep valleys and high mountains. According to the new study, however, this trend is much weaker when the natural patterns are considered.

“The current high level of biodiversity in mountainous areas is partly due to the fact that the mountains have acted as a refuge for species in relation to hunting and habitat destruction, rather than being a purely natural pattern. An example in Europe is the brown bear, which now virtually only live in mountainous regions because it has been exterminated from the more accessible and most often more densely populated lowland areas,” explains Soren Faurby.

The study has been published in the scientific journal Diversity and Distributions.