Way back before clocks were a thing, people had another natural way of waking up: the rooster’s crow. Now, a new study shows that they are so exact, that they don’t even need the light of a new day to know when it’s dawn – they just rely on their internal clocks. 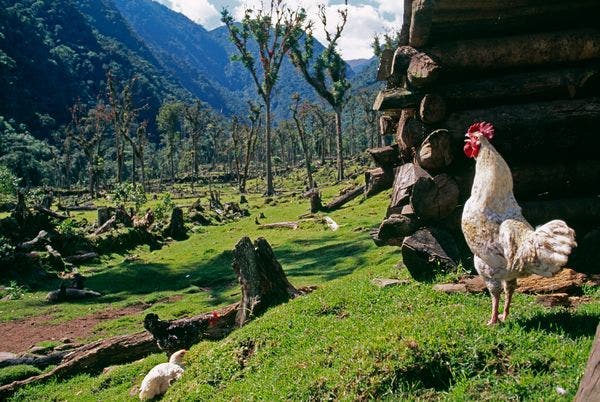 A rooster crows in a deforested Amazon cloud forest.

were studying the genetic underpinnings of innate vocalizations – which is just a fancy way of saying they were studying vocal behaviors that animals instinctively do without learning them – when they paid some attention to the ever-present (when you don’t want it) rooster song.

“To our surprise, nobody [has] demonstrated the involvement of the biological clock in this well-known phenomenon experimentally,” study co-author Takashi Yoshimura, who specializes in biological clocks at Nagoya University, said in an email.

During their experiments, they used PNP roosters—an inbred strain of chickens used often in laboratories because of their genetic similarities—through two different light regimens; on a sidenote, I didn’t even know that such a thing as PNP roosters exist.

The first group was exposed to 12 hours of light, and 12 hours of twilight for 14 days. During this entire interval, researchers note that roosters start to crow two hours before daylight. Meanwhile, the other group was placed in dim light for the entire 14 day period. Yoshimura and Shimmura noticed that the animals started running on a 23.8-hour day and would crow when they thought it was dawn, according to the study, published March 18 in Current Biology.

Even when the roosters were exposed to sound and light stimuli to test whether external cues would also elicit crows, they found that the animals rely more on their internal clocks than on external stimuli.

Kristen Navara, a hormone specialist in poultry at the University of Georgia in Athens who wasn’t involved in the study said she isn’t sure why nobody looked at this previously.

“I think many times we don’t think to study what appears right in front of us,” Navara, who wasn’t involved in the research, said by email.

“[For instance] we have definitely noticed in our own roosters that they begin to crow before dawn and have wondered why that was, but just never thought to test whether it was a circadian rhythm driven by an internal clock rather than an external cue.”

2 thoughts on “How a rooster knows to crow at dawn”