In what’s maybe the most comprehensive global temperature reconstruction study to date, scientists at Oregon State University and Harvard University found that the planet today is warmer than it has been during 70 to 80 percent of the time over the last 11,300 years. 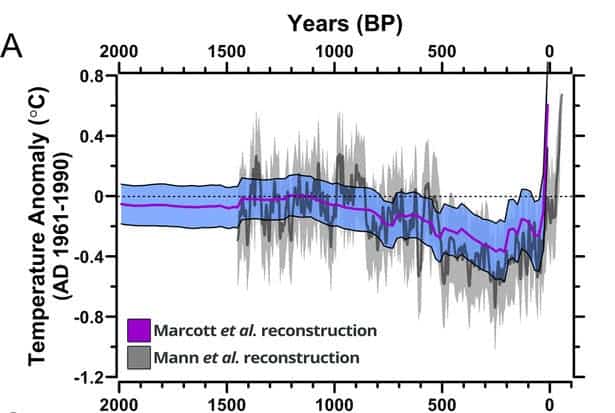 Global average temperature graph for the past 2,000 years. (c) Science

The authors note in their paper published in the journal Science that previous, similar studies have concentrated on assessing global temperatures for the past 2,000 years only. Other studies that have backtracked temperatures over longer periods of time are also insufficiently relevant since they concentrate their analysis over a specific region only, like Europe or North America for instance. Thus, the present study, through its temperature reconstructions up until close to the last Ice Age, aims to put climate change, past and present, in a much broader context.

“We already knew that on a global scale, Earth is warmer today than it was over much of the past 2,000 years,” Marcott said. “Now we know that it is warmer than most of the past 11,300 years. This is of particular interest because the Holocene spans the entire period of human civilization.” 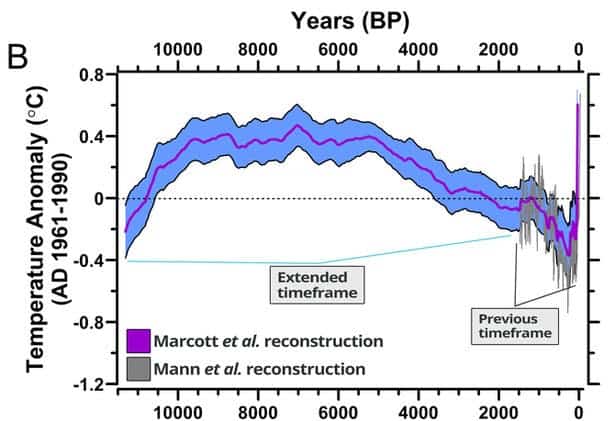 Global average temperature graph for the past 10,000 years. (c) Science

“When you just look at one part of the world, the temperature history can be affected by regional climate processes like El Niño or monsoon variations,” noted Peter Clark, an OSU paleoclimatologist and co-author on the Science article,. “But when you combine the data from sites all around the world, you can average out those regional anomalies and get a clear sense of the Earth’s global temperature history.”

For the year 2100, nearly every climate model evaluated by the Intergovernmental Panel on Climate Change (IPCC) shows that temperatures will exceed the warmest temperatures during that 11,300-year period known as the Holocene, no matter the greenhouse gas emissions scenario. Now, that’s something to ponder.

“The last century stands out as the anomaly in this record of global temperature since the end of the last ice age,” said Candace Major, program director in the National Science Foundation’s Division of Ocean Sciences, which co-funded the research with NSF’s Division of Atmospheric and Geospace Sciences. “This research shows that we’ve experienced almost the same range of temperature change since the beginning of the industrial revolution as over the previous 11,000 years of Earth history – but this change happened a lot more quickly.”