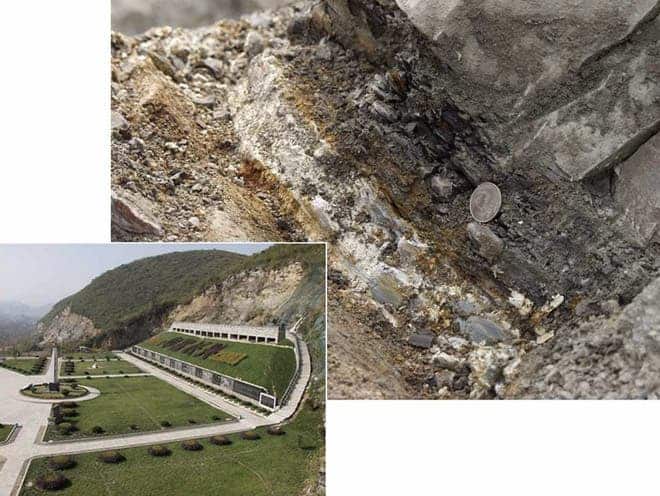 In China, the Meishan Geopark sits on the outcrop (gray wall, right) containing the most famous record of the greatest mass extinction (inset). (c) Shuzhong Shen

Paleontologists have found a link between cataclysmic volcanic eruptions around 252 million years and greatest mass extinction the Earth has ever seen, responsible for wiping out 90% of the biosphere in both land and sea.

Paleontologists, led by Shu-zhong Shen of Nanjing Institute of Geology and Palaeontology in China, analyzed nine rock outcrops across Southern China which they dated back 252 million years ago, at the end of the Permian period. In the outcrops, the scientists found volcanic minerals left behind from the eruptions, which spewed deadly CO2, sulfur and methane into the atmosphere and oceans.

These volcanic minerals were of invaluable importance for the researchers, as it allowed them to pinpoint the eruptions with an error of less 100,000 years. In their study, the group used the steady decay of radioactive uranium to lead, coupled with an improvement in the sample preparation procedure, which reduced the dating error by a factor of four.

[RELATED] 200 million years ago, half of all life on Earth went extinct from a methane eruption

“What’s striking is how fast the extinction was,” says paleontologist Douglas Erwin of the Smithsonian National Museum of Natural History in Washington, D.C., a co-author on the paper. The event had been seen as lasting half a million years, but the new dating limits it to no more than 200,000 years and quite possibly less than 100,000 years, Erwin says. “We’re paleontologists studying events 250 million years ago,” he adds, so “a hundred thousand years sounds like overnight to us.”