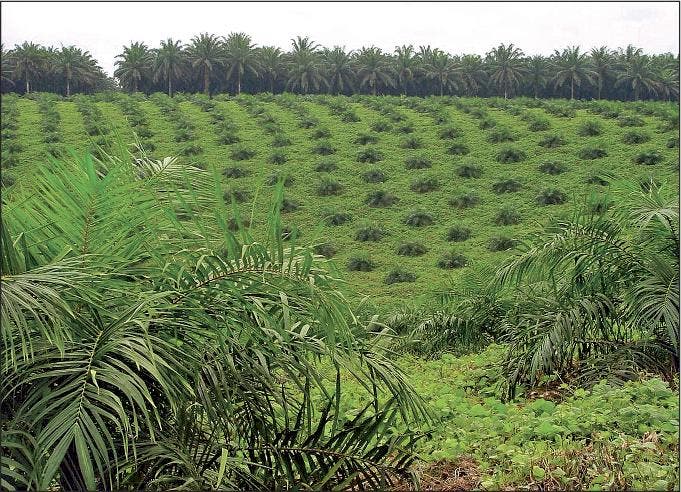 Young oil palm in plantation in Indonesia. The mature plant is used to produce biofuels, an alternative clean energy in emissions, however thousands of hectars of rainforest have been swept to make way for the palm. Because oil palms don't absorb as much CO2 as the rainforest or peatlands they replace, palm oil can generate as much as 10 times more carbon than petroleum. (Photo: T. Durand-Gasselin)

Biofuels are considered one of the leading alternative fuels on the market right now, because of their lower impact on the environment. Biofuels are made from plants or animals, and have gained a lot of attention from the general public and scientists driven by a need for increased energy security and concern for greenhouse gas emissions. However, biofuels aren’t all green. To make biofuels, a huge amount of carbon is released into the atmosphere, not by combustion, but as a result of its production process. A team of researchers from University of Leicester have revealed in a recently published study that carbon dioxide emission levels, due to oil palm plantations, are more than 50 percent larger than previously thought.

Previous studies have displayed erroneous results, since a number of various factors weren’t taken into account, as opposed to the current study. The Leicester researchers show that the scale of greenhouse gas emissions from oil palm plantations on peat is significantly higher than previously assumed. Previous studies estimated around 50 tonnes of CO2 per hectare per year, the price paid for manufacturing biofuels, however the true figure is around 86 tonnes of carbon dioxide (CO2) per hectare per year.

“CO2 emissions increase further if you are interested specifically in the short term greenhouse gas implications of palm oil production – for instance under the European Union Renewable Energy Directive which assesses emissions over 20 years, the corresponding emissions rate would be 106 tonnes of CO2 per hectare per year,” they note.

“This research shows that estimates of emissions have been drawn from a very limited number of scientific studies, most of which have underestimated the actual scale of emissions from oil palm. These results show that biofuels causing any significant expansion of palm on tropical peat will actually increase emissions relative to petroleum fuels. When produced in this way, biofuels do not represent a sustainable fuel source,” said Leicester’s Ross Morrison.

Over the past decade alone, biofuel production, especially biodiesel has soared, as the manufacturing technology, as well as the finished product itself, has become more efficient and cheaper. Just in 2010 worldwide biofuel production reached 105 billion liters (28 billion gallons US), up 17% from 2009, and biofuels provided 2.7% of the world’s fuels for road transport, a contribution largely made up of ethanol and biodiesel. This growth, however, has to be backed-up by a matching production chain, which inherently involves the oil palm business on tropical forests and carbon dense peat swamp forests in particular.

The rain forest in particular is affected by this, because of the enormous pressure imposed by plantations. Projections indicate an increase in oil palm plantations on peat to a total area of 2.5M hectares by the year 2020 in western Indonesia alone – an area equivalent in size to the land area of the United Kingdom. The plantation also uprooted monkeys and wild boar, which began raiding the neighboring community’s food supply.

It’s incredibly saddening that a “clean” source of energy such as this has to be tainted by careless expansion operations, which significantly harm the environment. Hopefully, the present discussed paper, which has already been acknowledged by top government climate officials and scientists alike, will help sprung actions for measures to be taken.

“It is important that the full greenhouse gas emissions ‘cost’ of biofuel production is made clear to the consumer, who may otherwise be mislead into thinking that all biofuels have a positive environmental impact. In addition to the high greenhouse gas emissions associated with oil palm plantations on tropical peatlands, these agro-systems have also been implicated in loss of primary rainforest and associated biodiversity, including rare and endangered species such as the orang-utan and Sumatran tiger,” co-researcher Sue Page, warned.

“Our study has already been accepted and used by several scientists, NGOs, economists and policy advisors in Europe and the USA to better represent the scale of greenhouse gas emissions from palm oil biodiesel production and consumption,” she added. “This is essential in identifying the least environmentally damaging biofuel production pathways, and the formulation of national and international biofuel and transportation policies.”