Hailed as a breakthrough in reconstructive surgery, an 83-year old woman had her lower jaw replaced by an exact 3D printed replica made out of titanium. The implant was made by heating and fusing together titanium ore, one layer at a time with a laser. The procedure took place last summer in the Netherlands, but only recently became public. 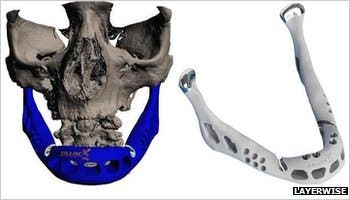 Computer model, next to the finished part of the lower jaw. (c) Layerwise

Usually, reconstructive surgery, such as the one the elderly woman would have had to go through were it not for this alternative, is extremely complex and laborious, typically requiring 20 hours of surgery, coupled with up to four weeks of hospitalization. Due to her old age, this was dubbed too risky, and instead the surgeons at the Biomedical Research Institute at Hasselt University in Belgium decided to opt for this innovative and novel technology.

After the design of the jaw was delivered as an exact replica of the one to be replaced, it only took a few hours for it to be printed, as a laser fussed thousands of layers together. The implant mimics all the complex feature of the original lower jaw – articulated joints, cavities to promote muscle attachment and grooves to direct the regrowth of nerves and veins. After the print was ready, it was given a bioceramic coating. At the end, it only weighed 30 grams more than the original bone structure.

It only took a few hours of surgery and four days of hospital care, a fifth of the current required recovery time. A follow-up procedure will commence soon, as doctors need to remove healing implants inserted into holes built into the implant’s surface and attach a dental bridge, such that fake teeth can be screwed on to provide a set of dentures.

“Shortly after waking up from the anaesthetics the patient spoke a few words, and the day after the patient was able to swallow again,” said Dr Jules Poukens from Hasselt University, who led the surgical team.

“The new treatment is a world premiere because it concerns the first patient-specific implant in replacement of the entire lower jaw.”

This remarkable breakthrough only goes to show how 3D printing can grow to become indispensable to surgery in the future. Broken limbs, entire structures that need to be replaced, can be fully customized and replaced easily. The reduced waiting time as a result of reduced procedure time, means that even more people can now benefit from surgeries faster, reducing risks and allowing them to return to their families a lot sooner. And these are just bones.

LayerWise, a specialized metal-parts manufacturer, which offered the necessary technology to 3D print the jaw, claims that print body organs ready for transplant, however such a feat might not be possible during our lifetimes.

“At the moment we use metal powder for printing. To print organic tissue and bone you would need organic material as your ‘ink’. Technically it could be possible – but there is still a long way to go before we’re there.”