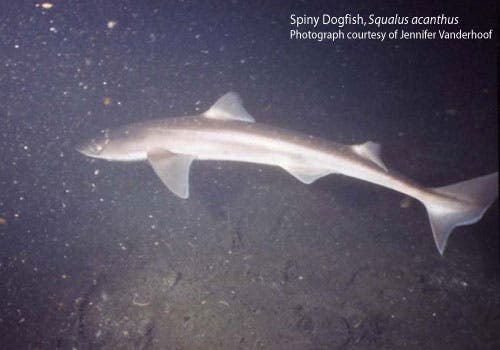 In 1993 Michael Zasloff, of the Georgetown University Medical Center, discovered an incredible compound inside the tissue dogfish sharks (Squalus acanthus), called squalamine, which has the remarkable property of shielding sharks from viral infections by preventing them from multiplying. Almost ten years later, further research shows that the compound might provide effective treatment and even cure terribly infectious diseases in the human body as well.

Squalamine works its magic by interrupting the life cycle of viruses, preventing it from replicating. Currently, the compound is known to block viral infections such as such as dengue fever and hepatitis, both very hard to treat  for humans.

Zasloff was initially looking for anti-bacterial agents in sharks, before he eventually stumbled across the miracle squalamine. He soon found that it actually inhibits the growth of blood vessels, suggesting the molecule could potentially stop cancer cells from multiplying. Squalamine molecules stick to a cell’s membrane, and in the process disrupts positively charged proteins initially in place on the membrane. When a virus invades, it needs those protein to reproduce, without them it dies.

“There is no other compound known to science that does this—this is a remarkable property,” Zasloff said.

The shark’s “antiviral defenses have been extraordinary,” Zasloff said. “It has adapted a very remarkable immune system and stayed with

According to Zasloff, squalamine might just be the secret to the shark’s remarkable evolution and survival for the past hundreds of millions of years.

Tests revealed that squalamine thwarted infection of the dengue fever virus in human blood vessel cells and of hepatitis B and D in human liver cells. The study goes on to claim that squalamine inhibited yellow fever, eastern equine encephalitis virus, and murine cytomegalovirus in lab animals.

The results are incredible and look extremely promising for the development of a squalamine based super-drug in the future. This won’t hold any repercussions back to sharks either, since squalamine has been successfully synthesized since 1995.

Apparently, there are some toxic side effects to the substance when a treatment dose is administered, but further research might render these effects to a safe margin. Cinical trials for the antiviral will begin in people in about a year.

Sharks have been hiding squalamine in their bodies for 700 million years, Zasloff added. “Now it’s a gift to us.”