A team of international researchers from US and China have employed a novel method to link enzymes together and then encapsulate them in a polymer shell. This enables the enzymes to work sequentially in chemical reactions, just like in nature. To illustrate their enzyme batch, a group of mice were intoxicated with alcohol and then injected with a packaged enzyme complex that metabolises alcohol. Those injected with the package dramatically sobered up within a few hours, while non-injected mice laid drunk as a skunk.

“In eukaryotic cells, most enzymes do not freely diffuse within the cytosol, but are spatially defined within subcellular organelles or closely co-localised as enzyme complexes along with other enzymes,” explains team member Yunfeng Lu, of the University of California, Los Angeles. “In consecutive reactions catalysed by multiple enzymes, such close confinement minimises the diffusion of intermediates among the enzymes, enhancing overall reaction efficiency and specificity. Meanwhile, toxic intermediates generated during a metabolic process are promptly eliminated by the nearby enzymes co-localised within the confined structures.”

Delivering a set of complex enzymes in the right order is very challenging, and typically implies  fabrication of delivery systems, such as liposomes or nano-carriers, first and then the enzymes are encapsulated into the carriers passively. In the method employed by the researchers, however, an alternate, more neat route is taken. 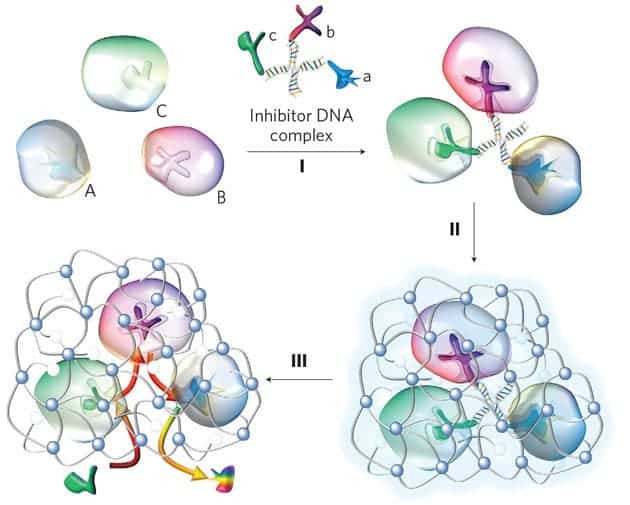 Lu and colleagues devised a way to bring various enzymes together and spin a sort of polymer cocoon around them. The first step is to identify inhibitors – molecules that will specifically attach to a given enzyme. A number of different inhibitors – each specific to its own enzyme – are then linked by a string of DNA. In the presence of the different enzymes, each inhibitor hooks its own enzyme, trapping them around the DNA scaffold and creating a complex. Gentle heating then removes the DNA scaffold and inhibitors, leaving the functioning enzymes encased within the polymer.

The concept was demonstrated with a complex of alcohol oxidase and catalase which can remove alcohol from the bloodstream – quite handy, I might add. The alcohol oxidase reacts with ethanol and oxidizes it into acetaldehyde and hydrogen perodixe. Now, the latter is toxic, so if you had only tried alcohol oxidase then you would have been in a lot of trouble. Luckily, the second enzyme, catalase, breaks up the hydrogen peroxide into oxygen and water.

The complex was tried in mice, subsequently fed with alcohol. Naturally, the animals became intoxicated rapidly and fainted within minutes. Some of the mice were injected with the complex and these were found to have recovered a lot faster than those who hadn’t been injected. More exactly, blood alcohol levels were reduced by around 35% over three hours. Neat trick isn’t it?

Now, don’t be fooled into thinking the scientists were just looking for ways to get drunk, sober, drunk, sober, and so on in a repeating fashion – thought this too might have been a goal. As well as providing a route for a possible antidote to alcohol poisoning, Lu says that the method can be generalised for different combinations of enzymes. ‘Through judicious choice of enzymes, we expect to be able to construct a novel class of complexes with programmable, complementary or synergistic functions.’

Findings were reported in the journal Nature Nanotechnology.