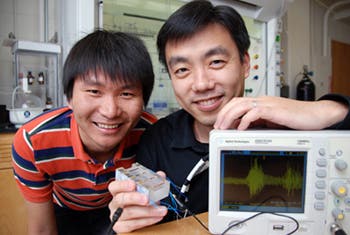 Graduate Student Jian Shi and Materials Science and Engineering Assistant Professor Xudong Wang demonstrate a material that could be used to capture energy from respiration. (c) University of Wisconsin

At the nano scale, even the slightest of motions can be harnessed and transformed into useful work. Material science researchers  at the University of Wisconsin, for instance, have developed a very thin plastic belt capable of vibrating from low velocity fluid flow, such as one’s breath.

Made out of  polyvinylidene fluoride (PVDF), the microbelt not only vibrates but also entraps electrical charge in response to the mechanical stresses it undergoes – a simple application of the piezoelectric effect. Thus, it can generate much needed electrical energy just enough to power tiny devices.

Since the device only needs discrete motion to power it, one’s breath or blood flow would be more than enough; add the fact that PVDF is bio compatible and you’ve got yourself an ideal piece of biotech. Using a more improved variant of this technology, current biodevices such as pacemakers would no longer require replacement or new medical tiny devices could be powered by the self-regenerating energy.  In time, and with some improvements made to the process, the researchers believe that the PVDF can actually be thinned to a sub-micron measurement .

During testing, the device reached typical power levels in the order of millivolts, while reaching up to 6 volt during maximum airflow speeds. The vibrating microbelt was developed by Assistant Professor Xudong Wang, postdoctoral Researcher Chengliang Sun and graduate student Jian Shi.

“Basically, we are harvesting mechanical energy from biological systems,” Wang said. “The airflow of normal human respiration is typically below about two meters per second. We calculated that if we could make this material thin enough, small vibrations could produce a microwatt of electrical energy that could be useful for sensors or other devices implanted in the face.”