By detecting specific biomarkers (proteins) produced by cancer cells, physicians can diagnose a tumor, however these are so diluted in the bloodstream that only after they’re sufficiently present can they be observed. Usually this happens many years after the tumor had already the chance to develop. Now, scientists at MIT have proposed a novel method involving nanoparticles specially developed to interact with cancer biomarkers to multiply the latter sufficiently enough to become visible. This allow for a much earlier cancer diagnosis by analyzing urine samples.

Cancer cells often produce large quantities of enzymes called proteases or MMPs that cleave proteins into smaller fragments allowing  cancer cells to escape their original positions and spread through out the body, breaking the proteins of the extracellular matrix that would otherwise bind them in place. 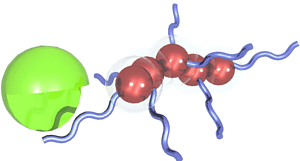 The particles (brown) are coated with peptides (blue) that are cleaved by enzymes (green) found at the disease site. (c) Justin H. Lo

The  MIT team, working with researchers from Beth Israel Deaconess Medical Center, developed special nanoparticles which they coated with peptides (protein fragments) targeted by the MMP proteases. The modified nanoparticles were found to accumulate at tumor sites, before making their way through the leaky blood vessels that surround tumors. From here on hundreds of peptides are released from the nanoparticles  which accumulate in the kidneys and are excreted in the urine. Using mass spectrometry these can then be detected in the urine sample.

“Instead of being dependent on the body to naturally shed biomarkers, you’re sampling the site of interest and causing biomarkers that you engineered to be released,” says Gambhir, who was not part of the research team,” said Sanjiv Gambhir, chairman of the Department of Radiology at Stanford University School of Medicine.

There are numerous types of cancer however. The researchers thus designed their particles to express 10 different peptides, each of which is cleaved by a different one of the dozens of MMP proteases. Each is distinctly build in order to identify the various types of tumors.

To test their method, the scientists used the nanoparticles to detect the early stages of colorectal cancer in mice, and to monitor the progression of liver fibrosis. Typically this is done through a biopsy which is extremely complicated and requires surgery. The researchers found that they could offer more rapid feedback than biopsies. In ongoing studies, the team is studying the particles’ ability to measure tumor response to chemotherapy and to detect metastasis.

Findings were published in the journal Nature Biotechnology.